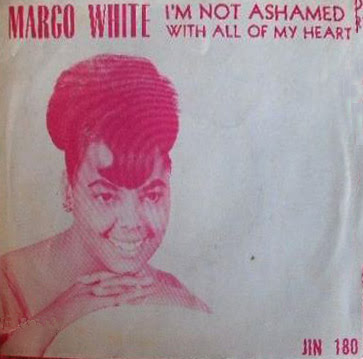 « She came through my door, she was an attractive black girl from Franklin, her real name was Marguerite Wright. Already she had recorded for George Khoury (‘Down By The Sea’ with the Cupcakes). She got a little reel-to-reel thing at the time, and I listened to her voice and said, ‘Yeah I’d like to record you for sure.’ Margo had one song she had written, and as she had no band I hired the Boogie Kings and we went down to Carol Rachou at his studio in Lafayette and we did a couple of sides on her.

« We redid the old Irma Thomas thing ‘Don’t Mess With My Man’ and it sold some, but I just couldn’t get it going. And the next thing I wanted her to do as a female R&B version of the Bobby Bland classic « I’m Not Ashamed’. That was a Bobby Bland favorite for years over here, people still asked for it and couldn’t buy it anymore. So I said, ‘Now a black female version of this song, maybe we could find a place,’ you wouldn’t want to compete a male artist against the Bobby Bland cut, no way. But my mistake was I had a white musician group. She was putting everything into it, but the musicianship, the background, wasn’t just right. It turned out more of a pop side, it didn’t have black soul feeling like it should have. But it turned out to be a pretty good seller anyhow, still selling. And she took on with a fast-talking promoter… when this thing was there, he recognized there was some money to be made with it. See, I never did fool with booking. I had enough irons in the fire without going into that, thats a full-time job, promoting and booking. Anyway this guy came on, the first thing I knew they went to California someplace and I’ve yet to heard of Margo White again, that’s been it."

Quoted from South to Louisiana: The Music Of the Cajun Bayous, book by John Broven