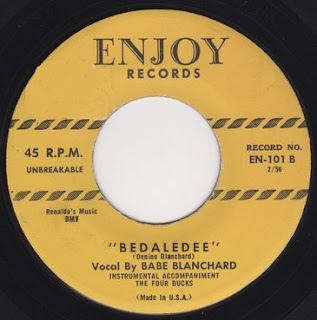 Backed by The Four Bucks, this is Babe Blanchard, also known as Ollie Blanchard.  Babe Blanchard had another release on Nestor Records (#26 : One More Time / Sugarfoot Sam).

His biggest success was as composer with a song he co-wrote with Johnnie Malone : "Please Love Me Forever" was a hit for Tommy Edwards in 1958. And also for Cathy Jean and the Roommates in February 1961 and for Bobby Vinton in September 1967.

But most of his compositions were recorded for small New York labels such as Tarx (Coo Coo Coodle Coo by The Admirations) and Tri-X (So Can I by Little Wilma).

This certainly one-off Enjoy record was probably produced by one Renaldo Denino whose Music Company has been reported in Panama where he handled the distribution of the Co-Ed and Mayhams record labels in 1960, both labels owned by the shady Mr. Norridge Mayhams.

Joyce Taylor, Waxmate of the Month 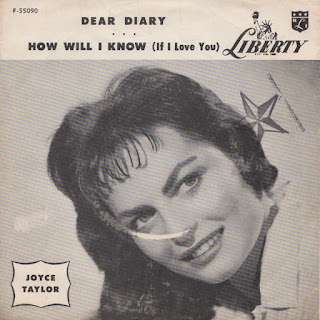 Born in Taylorville, Illinois as Joyce Crowder.  Most online sources indicates a year of birth in 1932, but 1936 is the most probable year.  Joyce looked and acted older than she was. A coal miner's daughter [or according to another source, her father was a singer with his own radio show in St. Louis]  she attended public schools in Taylorville and was the top baton twirler at Taylorville High School.  Her performance in a school talent show led to a recording contract with Mercury Records in 1953.  Roy Rodde, one-time manager of Joni James, was her personal agent.

Her first record, “You’ve Got Something” for Mercury Records, was written by Joyce while sitting at a table in her mother’s restaurant called Pauline’s Place on South Washington Street. 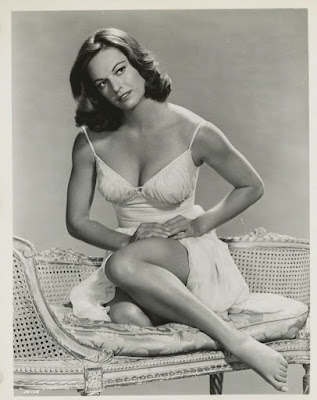 Under contract to Howard Hughes' RKO Pictures in the 1950s  she was only allowed by the eccentric and enigmatic tycoon to act in one picture, a small part in "Beyond a Reasonable Doubt" in 1956.  After seven frustrating years being “bottled up” by the eccentric and enigmatic Howard Hughes, she became a regular on the TV sci-fi/adventure series, “Men into Space” (1959) and acted in many other TV shows in the late fifties and early sixties including “Sea Hunt,” “Bonanza,” “Ozzie and Harriet,” “77 Sunset Strip” and “The Untouchables.”   Joyce’s movie titles include: “Atlantis the Lost Continent,” “Ring of Fire,” “Thirteen Frightened Girls,” “F.B.I. Story,” “Windsplitter,” “Beauty and the Beast” and “Rappacinni’s Daughter.”   In addition, she made numerous television commercials, some of which were for VO5 hair spray and cream, Rambler, Ford, Coke, Spic and Span, and Folgers Coffee.

She later married a stockbroker and left the business. Now makes her home in Colorado where she writes poetry.