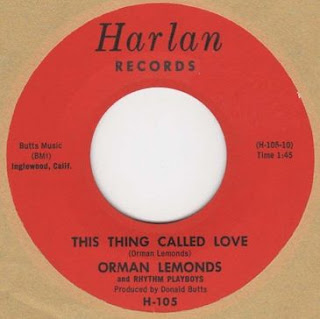 A 1947 graduate of Albia High School, he married Fern R. Foster in, 1949. Orman worked for 25 years at John Morrell & Co. and for 17 years for the City of Ottumwa, retiring in 1991. He was a member of the Rhythm Playboys band for 34 years along with Mike Miller, Pete Peterson, Ed Muchow and his daughter, Lyla Rose Drey. They appeared for eight years on Sunday evenings on KTVO.  He also led The Stepchildren who backed his friend Jack Paris on his LP  ("My Music, My Friends) on 2 J Records in 1974.

Owner of Harlan Records, located in Inglewood, California, was Harlan E. Butts, an enterprising businessman who was involved in many ventures over his long life.  His obituary has no mention of his interest for the music industry or of his label, which was probably founded under the impulse of his wife Laura E Butts (1923-1994)  who was a songwriter.