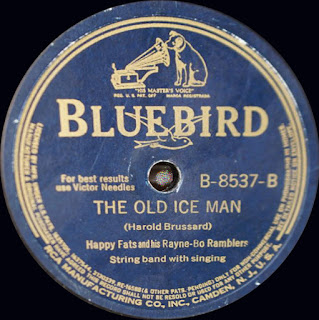 According to the Early Cajun Music blog, Harold "Popeye" Broussard was one of Harry Choates's more colorful musician companions.

Broussard by all accounts was an excellent piano man and singer.  His specialty was his rendition of the dance hall favorite "How Would You Like To Be The Old Ice Man".  Harry's fiddle and Broussard's piano complimented each other at times.  Other times, Harry and Popeye at times appeared to be in competition with each other to see who could raise the most hell.

Eventually Harry went on his way, leaving Broussard to his own devices in the Lake Charles musical scene.   Without Harry, Broussard left and started a family.  According to author Tim Knight: They were companions in deliquent behavior. If one was hired, both had to be hired; they were a matched set.

In 1940 , there was a ten-track recording session for Bluebird Records at the Jefferson Hotel, Dallas, Texas, . With Harry Choates on fiddle and Popeye Broussard on piano, their group consisted of Sandy Lormand on guitar, Pee Wee Broussard on banjo, Ray Clark on steel, and Happy Fats Leblanc on bass. The voice of Harold Broussard (uncredited) is heard only on "The Old Ice Man".  Issued on Bluebird 8537 in 1941, the single is credited to Happy Fats and His Rayne-Bo Ramblers, String band with singing.

Fifteen years later, Harold's voice is heard again on the Amos Como and His Tune Toppers' Starday release (Hole In The Wall / Heartbroken Lips), allegedly scheduled to be issued on the Goldband's subsidiary Folk-Star Records. Harold Broussard is still uncredited, instead the label states "Vocal by Amos Como".  From the same session recorded in 1955, a third song, "Baby Walk The Line", was issued much later on Goldband (#1036) as Harold Bee featuring Wm. Floyd, lead guitar. (Late 40's "Rock & Roll" Vocal, says the label.) backed with "Love Me Mary Ann" by Don Mooring with The Yellow Jackets.

More than fifteen years later (again), a Goldband single (#1258) backing "Talk That Trash Drink That Mash" with "No Longer Care For Me" was issued as by Harold Bee with the Blue Velvet Country.

More tracks were recorded by Eddie Shuler in the seventies, among them "Hobo Man" (added to zipped file), but all were left in the can. 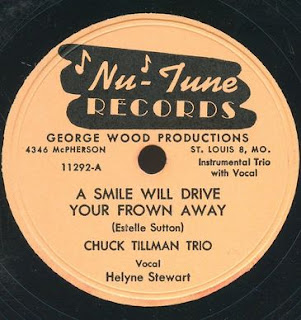 Born in East St. Louis, Illinois, Helyne started singing popular songs with an a cappella choir at the Lincoln High School. In a higher grade at the same school was another youngster with an interest in music, a dentist's son who played in the high school band, his name was Miles Davis.

As Helen Stewart, member of The Caldwells, see :
https://www.vocalgroupharmony.com/4ROWNEW/ItsLikeTaking.htm