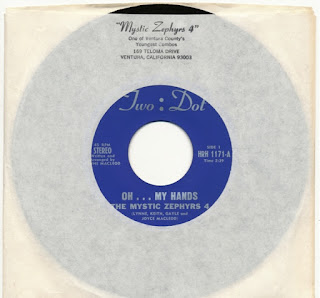 The Mystic Zephyrs 4 (aka The MacLeods) "one of Ventura county's Yougest Combos" were as follows:
Lynne Louise MacLeod, Jared Keith MacLeod, Gayle Yvonne MacLeod and Joyce MacLeod.  Age, at the time of release of this single, ranged from 15 to 9. 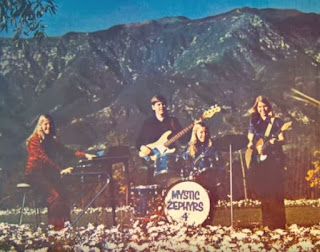 Recorded at the Two:Dot Recording Studio located in Ojai, California and owned by Dean Thompson.  According to Raymond Dumont, a ’60s psychedelia collector :

Second, sound quality. For a tiny studio out in the boondocks, Two:Dot maintained very high technical standards. And Two:Dot of course used analog equipment, which later was rendered obsolete by the digital revolution. Many audiophiles nowadays revile the sound of digital recordings and thrill to the sound of a well-made analog album, including those cut at Two:Dot.

Third, the cultural context. If a record gives off the right vibe, redolent of the late ’60s, then it will be cherished as an endearing artifact of that tie-dyed, paisley-patterned period that began with “Sgt. Pepper.”

“The late ’60s, early ’70s psych stuff is very interesting to collectors,” Dumont says. “Especially when it was released locally.”

The problem for collectors is that most Two:Dot albums were not in fact very psychedelic. Many a psych-folk aficionado has ponied up for a rare Two:Dot title by the likes of the Guys and Dolls or Mountain Glory, only to find himself in possession of a mediocre country-rock album, or one with a Christian theme. Even more problematic is “Maybe,” a very rare Two:Dot album by the groovy-sounding Mystic Zephyrs 4. Collectors who shell out hundreds of dollars for a copy may be disappointed to learn that the Zephyrs in question were four squeaky-clean teenage siblings from Ventura, whose album is rather less trippy than advertised. Back it goes on the online auction market with a new and somewhat desperate sales pitch, such as this one (actual ad):

“Incredibly strange and rare original private press from 1974! Incompetent teen-age family band with sincere pop songs and positive vibes. The drummer is only 12! May be your only chance to grab this highly sought after and mega-rare artifact!”

Above is from an article relating the story of the Two:Dot Studios found here


Four squeaky-clean teenage siblings from Ventura? What's wrong with that?

We're Voting For Wallace For President 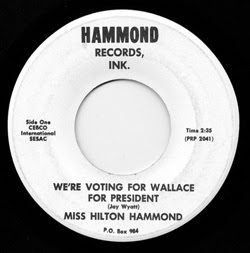 Re-up of requested songs by Miss Hilton Hammond on her own Hammond and Rooster labels. See previous posts here

We're Voting For Wallace For President

This is actually anti-Wallace. Vote for him for president to get him out of Alabama!

Charlie
Based on an overheard conversation about a planned knife attack,


Butterbeans
Miss Hilton singing about her love for butterbeans, ham and cornbread. Miss Hilton says she loves those butterbeans so much, that she wants them on her grave when she dies, instead of flowers. 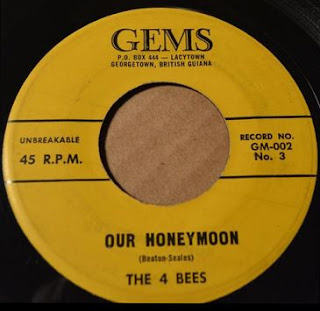 Lead singer on this record is probably Gloria Beaton, wife of Norman Beaton.

During the 1950s Lacytown was one of the most musically creative spaces in the Guiana colony; Al Seales was one of entrepreneurs who ran their business in a single block in the Lacytown bordered by Robb Street, Wellington Street, Regent Street and King Street.  Also located in that block was Freedom House, the headquarters of the Peoples' Progressive Party [..] and "Point".  "Point" was at the corner of King and Regent Street and was the venue where independant musicians were hired by bandleaders for temporary assignments


Al Seales started his working life as a sailor on the Demerara River and was given a quatro by an Amerindian man. From the quatro he graduated to the banjo and joined the Washboard Orchestra in the 1920s.

As he acquired seniority and became a leader in the band, he took up the saxophone. His tutor was Gun Fernandez. Seales’ love for music was multidimensional. One of his first entrepreneurial ventures was a beer garden that featured a record player and a collection of contemporary jazz and pop records “which he got from old friends who were still working on ships coming from North America and Europe.”

This feature attracted a loyal clientele who constantly offered to buy the record player and the records. Seales, the entrepreneur who never drank or smoked, saw a business opportunity and a way to get out of selling alcohol. He opened General Electrical Musical Supplies (GEMS) at 40 Robb Street. After a few years, he purchased the property, which has remained in the Seales family since. Over the years the business grew from selling records and musical instruments to include a recording studio. Seales never established a pressing plant, so, his recordings were pressed by Melodisc in the United Kingdom.

Norman Beaton (1934 -1994), born in Georgetown, Guyana (then British Guiana), the son of a postmaster who became the country's chief postmaster, went to public school and teacher-training college before teaching there, rising to the post of deputy headmaster at a school in Demerara. At the same time, he followed his love of calypso music by forming the Four Bees vocal group and making 20 singles. The group toured Surinam and French Guyana with the revue Caribbean Cavalcade and Beaton himself was named Calypso Champion of Guyana.   Leaving Guyana for London in 1960, he landed a job as a teacher in Liverpool, becoming the first black teacher to be employed by the Liverpool Education Authority. 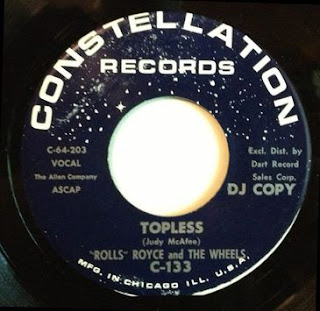 "Rolls" Royce and The Wheels


Musician/drummer Royce McAfee toured with Johnny Carroll and the Spinners in the 50s and 60s, for Warner Bros. and Capitol Records. He led The Unique Three and the Royce McAfee Combo in the 60s and 70s. He owned Royce McAfee Music and was publisher and producer on his ARA Record label.

Rolls Royce & The Wheels were sessions players in Dallas Texas mostly doing commercials and jingles for radio.  They were also the band to back Mary Smith..aka Lady Wilde (born Mary Murray, March 1942 in Liverpool, England). on "Poor Kid" (ARA, 1965).

Judy McAfee, Royce's wife, is the composer of the song featured here and also probably the female heard on the record.

1964 Constellation 133
"Rolls" Royce And The Wheels
The Frog / Topless

God Is So Good 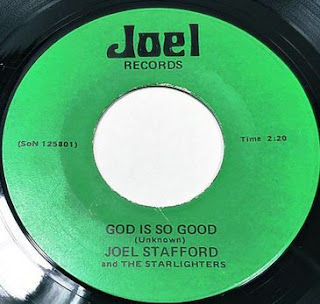 Joel Stafford
and The Starlighters


God Is So Good

Wheelchair Is Sought WINSTON-SALEM (AP) — Joel Stafford, 9-years-old and suffering from a rare bone disorder, has his heart set on an electric wheelchair. "I'm going to buy myself a wheelchair," he vows. "I'm going to take it to school so I can roll myself around." Joel has a congenital condition called osteogenesis imperfecta, which means his system lacks the calcium needed to harden and develop bone tissue.  He has steel rods in his legs, but his arms have not developed enough to permit such bone-replacing surgery. Joel sings regularly at his church, and his parents — Wayne and Linda Stafford — took him to a small recording studio to make a record.  It is called "God is So Good," and has sold about 1,000 copies so far. The electric wheelchair Joel wants could cost as much as $1,500. Joel made the recording in hopes of raising enough money to buy the chair.  Though small and unable to move around well, Joel has a happy face and is undaunted by the dangers confronting him.  He hasn't broken a bone since February, a considerable improvement over the past. Often a simple wrong movement could cause a bone to break. He has received therapy at the Shrine Hospital In Greenville, S. C. He attends school at the Children's Center In Winston-Salem, and enjoys school.

Apparently little Joel had raised enough money to buy the wheelchair. But the wheelchair was stolen shortly after, in 1977.  The Piedmonitor.from September 01, 1978 reported :

Frank Barnes, of Winston maintenance, met one of his special friends, Joel Stafford, at the Children's Center during the solicitors' tours of the Forsyth County United Way agencies. The Company long has had a tradition of giving generously to the United Way. It is a tradition that unquestionably deserves to be maintained. and Frank helped promote Joel's gospel singing records to raise money to replace his wheelchair. Joel and Edwin are two of the many people helped by Piedmont's participation in the annual fund drive.

God is so good?