It's a Hap-Hap-Happy Day 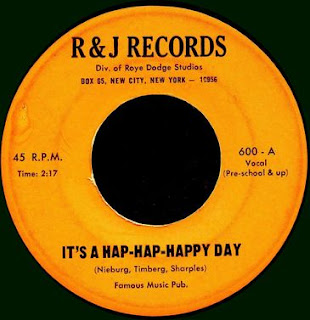 It's A Hap-Hap-Happy Day

R&J Records, the studio label, released a series of records by uncredited artists designed as accompaniment for dance instruction. [See discography at discogs]


It's a Hap-Hap-Happy Day was written by cartoonist Max Fleischer's staff musicians Sammy Timberg, Winston Sharples, and Al Neiberg.  the song was featured in "Gulliver's Travels," Fleischer's animated feature film and sung by the Lilliputian villagers as they made a new suit of clothes to fit their friend and protector, Gulliver. 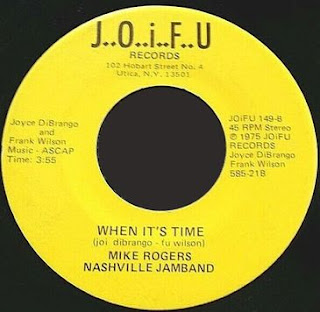 Oddity from 1975.  Who were Joyce Di Brango and Frank Wilson, sole owners of JOiFU Records, located at 102 Hobart Street, in Utica, N.Y.? I can't find much info about them.

Joi (Joyce Lauraine DiBrango) was born in 1944.  A 1959 newspaper tells us that she was a member of The Utica Grammar School Girls Basketball League team that wins a city “sports day” tournament  and that she was from Roosevelt School.

Even more mysterious is Fu aka Frank Edward Wilson, born in 1912.

Text (mixing upper and lower case) found on the back of their second album cover is a complete nonsense :

This is the 2nd Broadway Musical Project by ASCAP writers/publishers and record label owners Joyce Lauraine Dibrango "joi" and Frank Edward Wilson "fu" from Utica New York. They are experienced veteran professional all music artists, Jazrok is their paramount style and Frank's stint with the Utica Civic Orchestra brought the USA National Title to that Group in the 1950's.

"Rocking with Barbara" song 5 explains "Queen Barbara" is the real USA all Music Queen. She is Real. You may see her any day at her executive office desk. Her 1970-1980 The greatest in all time USA history. That gigantic. 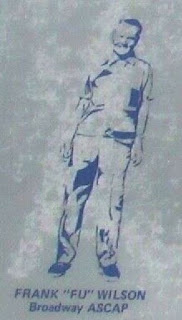 I'll Meet You By The River 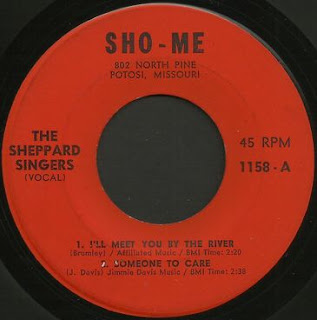 I'll Meet You By The River


Unlisted Starday Custom release out of Potosi, Missouri. From 1966.  Members included Marjorie Sheppard (1925-1999) and her father Orvil Sheppard.  The Sheppard Singers sang gospel on KYRO Radio Station and also at many churches in the Potosi area. 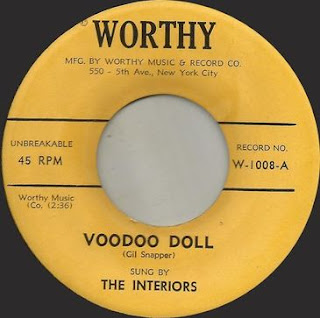 Worthy Records and Worthy Music were located at 550 Fifth Ave., N.Y.C.  Gil (Gilbert) Snapper owned the label. He recorded on his own label as Ashley Beaumont The 18th . 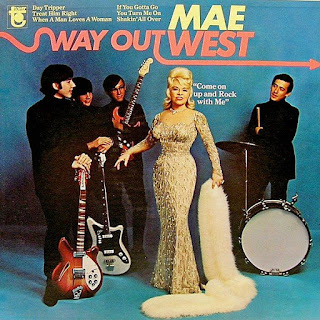 
Backing band : Somebody's Children (aka the Chyldren, aka The Off-Beats, aka The Children)
A Dagonet Production (David Mallet)

Derek Taylor* wrote in his book "As Time Goes By" [excerpt]

[...] David Mallet called me one day in Hollywood and asked me if I would like to represent Mae West. I said, oh I don't know, I'm very busy, you know how it is. He said she had made a rock'n'roll record, an album called Way Out West for Tower Records (a Capitol subsidiary which Capitol closed with an axe in the back in 1969), and she was going to need publicity on account of she had not been heard for some years.

David Mallet was then in his early twenties. He was British, living in Hollywood, and working as assistant producer to Jack Good on Shinding!, and [...] he was very enthusiastic and persuasive and it took him all of half a minute to persuade me to change my mind and I promised to work for Miss West.

He warned me there was much to be done. "She is a very fussy old lady," he said, "but you mustn't ever use the word "old" in her presence.  She would be very cross, very cross indeed." [...]


*Derek Taylor was The Beatles’ Press Officer in 1964 and the Apple Press Officer between 1968 and 1970. Between times he represented many acts including The Beach Boys and The Byrds. He continued to work with The Beatles in the 1980s and 1990s,

Skeets Price and The Coastiers Orchestra 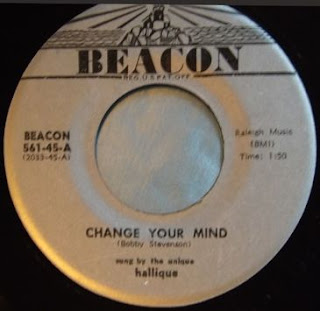 A Man Only Does


This is a second issue, probably from 1964, released on the Beacon's Joe Davis label.  The record was previously issued on Hudco, a label owned by Joe Davis' wife, Bertha Davis.

Described by a 1944 article as an Harlem beauty, Hallique was known because of her extensive travelling with her husband, Haywood Henry, sax player with Erskine Hawkins orchestra, According to the same article "She operates one of New Yorks's finest fashion marts known as Hallique's Fashion Shoppe and is recognixed as a fashion stylist of rare distinction."

She recorded only sporidically. There was a single for Clock in 1960 and another on Joe Davis in 1966 (See 45cat)

While a student at Lubbock’s Monterey High School in the mid-sixties, Norman Carl Odam, the only son of Utahonna Beauchamp, a clerk at J. C. Penney’s, and Carl Bunyan Odam, an auto mechanic, would stand on the school steps and bang on an old guitar (using only the G7 chord, according to Ely). Often, suited up in his Ledge outfit, he’d tool into fast-food drive-ins in a light blue Chevy Biscayne with “NASA presents the Stardust Cowboy” spray-painted on the side, hop on top of the car, and start his show. The kids would rearrange their cars to face him. Some would cheer him on, others would pelt him with Sweetarts or clumps of dirt, then invariably—before he could demonstrate his skills on the bugle and the washboard—fights would start and he’d have to peel out.  (from Texas Monthly, June 2000) 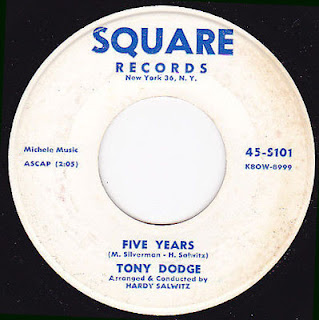 
Tony Dodge, real name Alan Mark David, born in 1928 in New York City. David’s father worked for the New York Press.  Well, not exactly.  Essentially, he was a presser in New York’s Garment Center.  But, when asked what his father did for a living, he always said he was with the New York Press.  Of course, his mother was a housewife, no self-respecting woman worked outside of the home in those days.  The family moved to Bensonhurst, Brooklyn in 1935.

A Korean War Veteran, Alan David was with the United Service Organization and an entertainer in New York, City & Suburban Night Clubs.  Joined the Dr. Scholl Company in 1954.

I Wanna Hold Your Hair 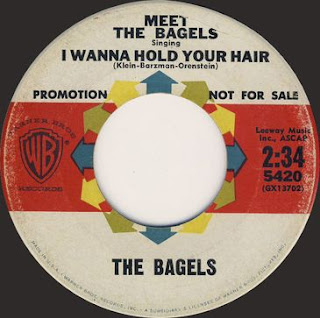 I Wanna Hold Your Hair

Larry Orenstein, probably the man behind The Bagels (did he also sing?) wrote both songs, which were published by Leeway Music (ASCAP) owned by his old friend Hal Levy.

A jazz trumpeter and singer, played trumpet for the Paul Whiteman and Orchestra (as "Larry Neill"), then performing solely as a vocalist with the orchestra of bandleader Shep Fields. In addition to his work with other bands, such as that of Ray Noble, he kept busy as a sideman for radio variety shows.

In 1955 he was hired on to The Donald O'Connor Show (1954) as a songwriter, and later wrote songs for (and had a small part in) an episode of I Love Lucy (1951) called "Lucy Goes to Scotland". In 1956 he was hired by Sidney Miller, with whom he had worked on "The Donald O'Connor Show", to write songs for The Mickey Mouse Club (1955), for which Miller was a director. In addition to writing music, Orenstein also came up with storylines for several episodes. He left the show at the end of the season. He freelanced as a songwriter for television (he wrote the theme song for Bachelor Father (1957) and stage. In the 1970s he started his own advertising agency, and among his clients were among others Sony, Pioneer and McDonalds.

He died of pneumonia on February 22, 2006, in Sherman Oaks, California. 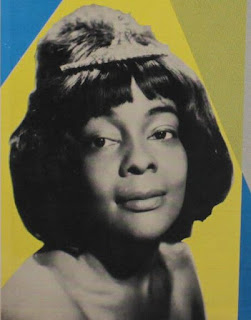 Info from the LP's back cover:

Since the Queen's passing, Redd Foxx has seen and heard dozens of new voices and faces in the many clubs he works, but none that compared to the great Dinah Washington, that is, until he heard Donna Drake.  Since that first listen, Redd has been determined to let the World hear her too.  That determination led to the making of [the] album

Donna Drake was born in Wheeling, West Virginia and come to Detroit at age 3.  The oldest child of four children, she attended Detroit's Northern High chool where she first sang with the school choir and participated in variety show with such school chums as Paul Chambers, Donald Byrd and Barry Harris. After winning a Windsor, Ontario, talent contest, she received a contract for a television show. (...) She worked for a while with the late great Charlie Parker till the time of his death.  After that, a tour of the East and Midwest and parts of Canada, and then a supporting singer for such stars as Gloria Lynn, Betty Carter, Brook Benton and Joe Williams.  Donna's meeting with Redd Foxx took place while he was appearing at Detroit's Charade Club.  Backing Donna is the Wynton Kelly Trio, the same group who for so many years backed Dinah Washington. 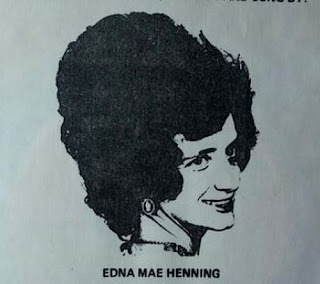 From Manchester, Pennsylvania, here is Edna Mae Henning (born in 1941) on her own Henning Surprise label. According to waxidermy, she wrote over 10,000 songs.

Discography (all on Henning Surprise, late 70s and 80s)

NRF-388
Please Mr. Dee-Jay
Getting The Blues Over You 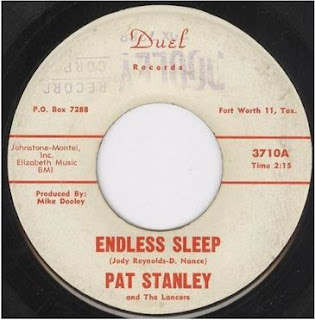 
Covers of Jody Reynolds and The Crescendos by Pat Stanley about who I know nothing. And this release seems to be the only one of this Duel label? Date is also unkown (mid-sixties?)

Fort Worth, Texas record, produced by Mike Dooley, who had managed and produced Nick Kithas (aka The Creep) and Eddie James and the Ambers, both issued on Homer Lee Sewell's Oakridge Records.