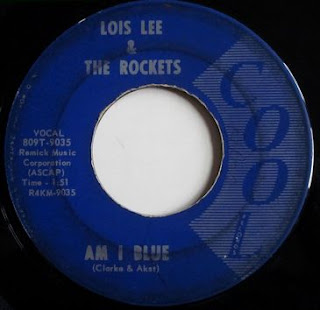 
Despite the fact that this Cool label has a Nashville address and may have been linked to the Globe Studios in the same town, I'm pretty sure that the band was from the Chicago area, at least Lois Lee was. Other than that, not much information.   There was several singers of the same name. And there is one who recorded for Okeh Records in 1959 who has a voice strikingly similar, a such point that I think she is possibly the same singer.  Any thoughts ? 
Leader of The Horsemen was Hi Busse, original member of the legendary "Frontiersmen" and "The Riders of the Purple Sage", Hi Busse left an indelible mark upon Western music.   Busse's career spans seven decades, playing with Roy Rogers and "Gunsmoke's" Ken Curtis, acting in Hollywood westerns in the 1940's and making countless radio and music hall tours.


Joanie Hall started performing at a young age with Marian, her older sister, as the Saddle Sweethearts  :


Joanie played standard guitar, Marian had an Oahu lap steel with “mother-of-pearl” finish and matching amp, and they both sang.   They did shows on “pioneer television,” back when the makeup was orange and the director was also the janitor that swept up at the end of the day. There were TV antennas on about every fourth house then.

Joanie got her recording career started back in 1955 with Sage and Sand Records. Woody Fleener had started the Sage and Sand record label and also signed a top vocalist, Eddie Dean. Also signed at that time was the Frontiersmen and Marian Hall as a featured steel guitar player. Joanie was called in to sing in a chorus or play rhythm guitar. But she began to get noticed.

As the story goes, Eddie Dean told her one day to practice up on her singing a bit as he would soon tell her some good news. Later on, he called to tell her that he wanted her to do a duet record with him. They recorded "Open Up Your Door" b/w "Sign On The Door". After that session, Woody Fleener knew talent when he saw it and signed her to a contract and told her she had just made her first record.

The Red Fox label was a subsidiary of Skyway Records. Louise Lewis and Everett Whenham, writers of Wild Horses, owned Skyway.  For some reason, the Red Fox subsidiary was launched in 1964, showcasing Miss Louise Lewis herself with Blimp, Whimp & Skimp.

How Louise Lewis and Everett Whenham managed to convince The Frontiersmen to record two singles for their Red Fox label, that's one more mystery surrounding the story of Skyway Records and the intriguingly elusive biographies of its owners.
Posted by Bob at 3:03 PM No comments:

Who Can I Believe 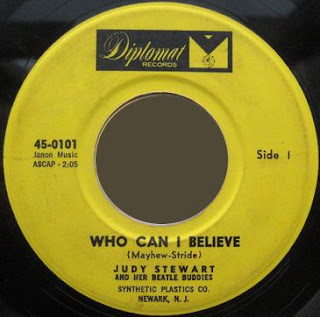 Judy Stewart
and her Beatle Buddies


b/w I'll Take You Back Again.  Both songs were also on the album issued by The Beatle Buddies on Diplomat Records (#2313).  The album doesn't have the Judy Stewart credit, doesn't have any songwriter credits.  But it does have a picture of the anonymous ladies on the cover. 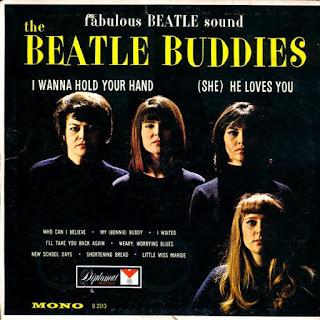 Aubrey Mayhew, composer of the song and also probably producer of the Beatle Buddies, grew up in Washington and went into the music business in the late 1940s, first as a booker, then as director of the Hayloft Jamboree on the radio station WCOP in Boston.
After working for budget record companies such as Pickwick Records and Diplomat Records, he formed Little Darlin Records.He was also known as passionate collector of John F Kennedy memorabilia.

Aubrey Mayhew was in Houston in November 1963 when President John F. Kennedy was assassinated. At the time, Mayhew was working for the New York-based Diplomat Records. “I was staying at the Shamrock Hotel in Houston, trying to buy some George Jones tapes from Pappy Daily [the owner of Jones' Starday record label],” he said. “The Kennedy assassination happened right there on television. I immediately called a friend in Houston, who brought over two tape recorders and all the tape he could carry.

“We recorded everything off the television for about 12 hours. I rushed the material back to New York, and we put out the first ‘Kennedy Speeches’ album. At that time, we had 300 Woolworth stores in our pocket. We got prime display. We sold about 3 million albums in four months.”

This incident led Mayhew to his affinity for Kennedy memorabilia.  His prize possession is the Texas School Book Depository. “Why did I buy it?” he asked me. “It was a premium item for my collection. I paid $600,000 for it.”

Mayhew removed the original window where Lee Harvey Oswald allegedly shot Kennedy. Mayhew claims the window is stored in Nashville, but some in Dallas argue that it is not the original window. “There’s a debate over everything in life,” Mayhew said emphatically. “I don’t lie! I don’t cheat! I don’t steal! I saw them take that window out.”

I Hear The Jukebox Playing 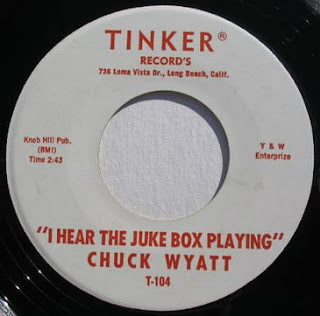 Blue-eyed blues by a country singer.  Chuck Wyatt also recorded on Del-Aine Records (Nashville?) on which he also produced a Alice Wyatt single.  Knob-Hill, the publisher, was an off-shoot of Artists Productions, Inc. as was Boyd Records, located in Nashville but formed in Oklahoma by Bobby Boyd, a five-eights Choctaw Indian, who worked in most of the John Wayne movies.


There was a Chuck Wyatt in the fifties billed  "The Howling Hillbilly.", heading a Chuck Wyatt Rockabilly Music Show in 1957 and described as a popular western entertainer with his "Kowboy Karavan" in 1958, I don't known if he's the same artist.

If I Could Buy You For What You're Worth 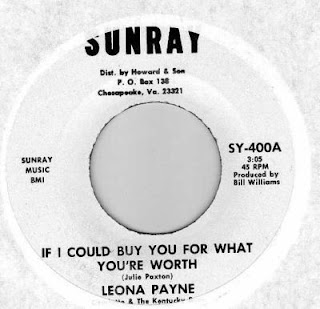 If I Could Buy You For What You're Worth
Julie Paxton, Sunray Music, BMI

Leona Payne was, like Charlotte Duzan, the backing band leader, from West Michigan and had least two other singles on the Rascal label.  She may have been also associated with Wayne Moore, a recording artist and label owner (Wa-Mo Records) from Sparta, Michigan.

Sunray Records was probably owned by one Ouida Smith who penned the two sides of the Western Airs (Sunray #200) which featured Dick Shu, probably the earliest single recorded by country artist Dick Shuey.  The said Dick Shuey who, according to Billboard, has joined Sunray Records as national promotion manager in June 1968. 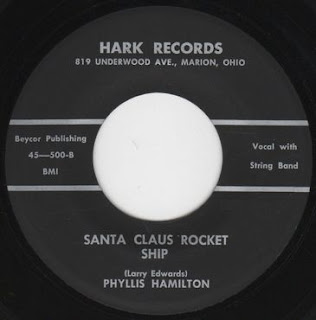 Little Phyllis Hamilton was a regular on "Ohio State Country Round-Up" presented each Saturday night at the Ohio State Fairgrounds and aired 11-12 p.m. over WMNI (emcee : Jimmy Stout). She was later one of the performers at The Paint Valley Jamboree from its debut, formed in 1965 by James Sweeney, of Bainbridge, and Lou Harris, of Portsmouth.

She gave up music for 40 years until the owner of the Jamboree convinced her to come back recently.   You can see one of her recent performance  here 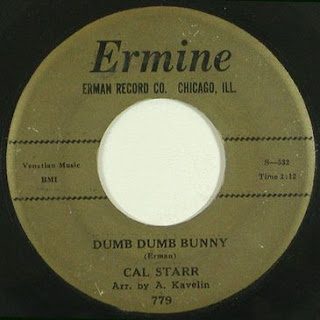 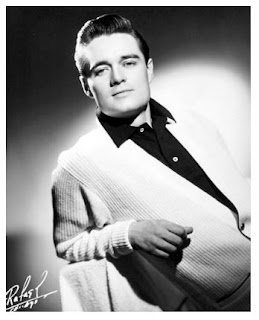 Beatles, We Want Our Girls Back - Now! 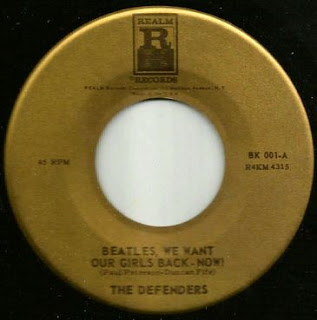 Beatles, We Want Our Girls Back - Now!
new link in comment

Bring back our girls... but PLEASE keep Yoko!

Yes, from the same label who give us Florian Monday.  Realm Records was a label set up by Jackson Leighter.  , a man of many talent. Certainly humorous, multifaceted, he also was, I guess, an imaginative prankster.   A book should be written about his life.