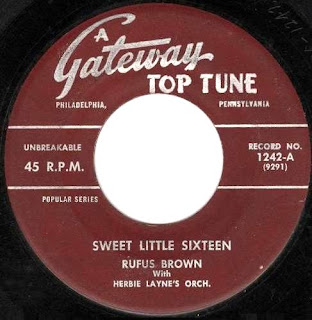 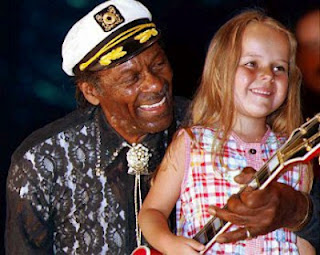 According to Maxwell Demon :

"During a show at the Ottawa Coliseum Berry saw a little German girl, seven or eight years old, pursuing singers for their autographs to add to her ‘wallet full of pictures’, seemingly more interested in the trophy than in the music being performed. The idea for one of his most successful songs was born, although the girl who provided inspiration was a little too young for his taste, she became ‘Sweet Little Sixteen’.

Early in December 1957 Berry laid down a demo of the song, perfectly capturing the excitement of its teenage heroine and is another striking demonstration of Berry’s ability to think himself into the mind of someone half his age. When released in February ‘Sweet Little Sixteen’ proved Berry’s biggest hit to date."


Note 1 : Chuck Berry is well known to think (or else) himself  into the mind (or else) of someone (female, preferably) half his age.

Note 2 : there IS a website named Chuck Berry - Mr. Rock'n'Roll, dedicated to the memory of... Bo Diddley (?!?). This site has detailed tour information for several artists, including Chuck Berry : he played the Auditorium Arena  in Ottawa, Ontario on November, 18, 1957. 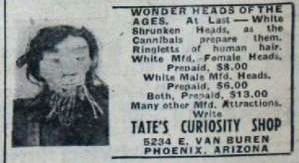 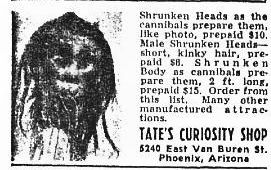 Born in Poetry Texas, September 7, 1884. Homer Tate would become the prolific creator and purveyor of all things weird and bizarre to the sideshow men and women of the the 1940's & 50's.

A Shrine to Homer Tate, The Desert Pygmy King, is open to the public HERE. 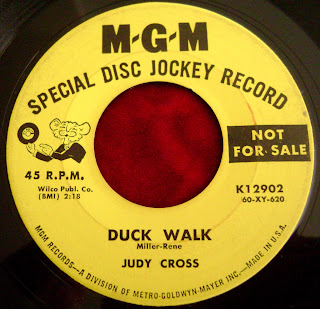 ✔ Spotted this one en ebay today described as "hilarious insipid teener".   Auction
✔ Wanted to know more.
✔ Searched YouTube.
✔ Found "Duck Walk" by Youtuber Puddlebacky.
✔ Wanted to know more about Puddlebacky.
✔ Found out that is a genuine crapdigger (see video of him digging in the woods HERE).
✔ Found out that he is also Puddleboy on Flickr where he exposes some of his finds.


And what about Judy Cross ?

Judy Cross was a morning radio show producer (and assistant-librarian) at WINS in New-York and probably in need of some attention decided to make a career in music.  Joe Rene, owner the tiny Claro label in New-York was glad to help and she recorded her first single (Mrs. Billy Brown b/w Old Enough to Know) for Claro which was issued in mid-1959 (probably in July).  She promoted her single on the Hy Lit show on July 30th and on American Bandtstand on August 20.

"Duck Walk", her second single followed in the latter part of 1959 backed with  "When's He Gonna Kiss Me".   She approched Bruce Wendell,  WINS' chief librarian, attempting to bribe him for pushing her record on air.   That's probably why she had to resign in December 1959 and came back only when WINS program director Mel Leeds left. (Mel Leeds and other staff members were caught up in the web of the Payola scandal hitting the entire radio industry in 1959-1960).  MGM Records re-issued the single in 1960.

And what about Joe Rene ?

Was A&R for Beltone Records, 1960-1961 ("Tossin' and Turnin'," Bobby Lewis, a song co-written by his wife Malou Rene)., for RCA Victor (mid-sixties) and recorded himself with his orchestra a number of albums on Manhattan, Tops, Epic and other labels. 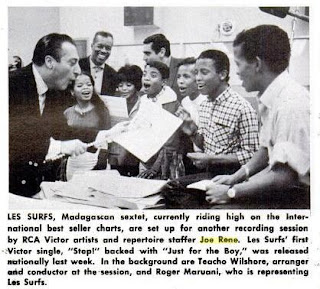 Joe Rene, here with Les Surfs, a sextet from Madagascar (1964) 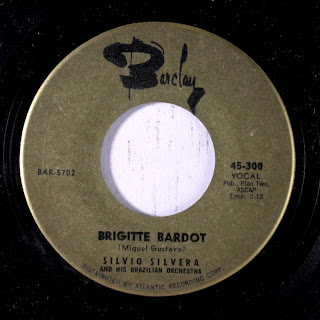 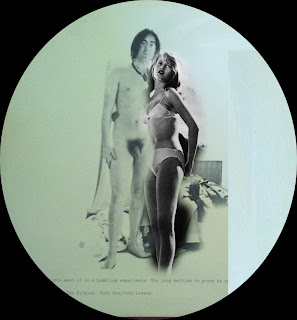