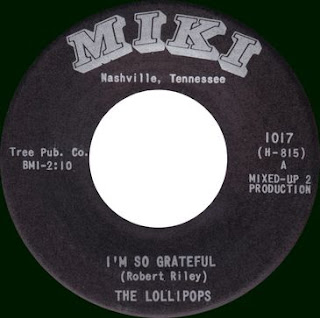 
Songwriter Robert Riley was a member of The Prisonaires on Sun Records. ( 'Just Walking In The Rain').  The song was written in 1952 with Johnny Bragg.  Both were then hosts of the Tennessee State Prison in Nashville.  Released in 1957, Robert Riley wrote songs for Excello Records in Nashville and for the King and Todd labels who held sessions in Nashville, his hometown.


He would work on musical arrangements for Ernie Young at Excello, and he had an income-generation role too: blues singer Jerry McCain told interviewer David Nelson how Young, ''had this black dude there. His name was Robert Riley... What he would do is sit there and listen at the songs and everything, then he'd pick out a verse that he says is not strong enough. But in turn he writes him a verse that he want to insert in there so he can get writer's royalties. So Mr. Young says 'Jerry, Robert said it was a good song but the second verse ain't strong enough'. I said 'I ain't changing nothing', and Mr. Young said, 'well Jerry, see, there you go again. You supposed to go along with me'''.


Then he was signed by Tree Publishing (Jack Stapp and Buddy Killen) as writer and, later, employee..


Buddy Killen had mixed feelings about whether he did right to hire Robert Riley for Tree Records and for his Dial label. On the credit side Riley did write some good songs and, crucially, he introduced singer Joe Tex to Killen at the start of the singer's career. But then, on the debit side, Killen remembered: ''When Riley was released from prison he started coming around to Tree hoping to get some of his songs recorded. I signed him to Tree as a writer and ultimately hired him to work for the company. One day I asked him to take a check to Jack Stapp over at the radio station. The check for $1000 was for royalties from a Roger Miller song. Later that day... both the check and Riley were nowhere to be found. He had forged a signature, cashed the check, and gone to a convention in Chicago... I was furious. I'm going to have you arrested', I said. Riley began to cry and said that I was only going to prosecute him because he was black. That was utter nonsense and he knew it... I later found out that he had sold some of his songs for pocket change while under contract to write for Tree''

Other artists on the Miki label includes Lynn Britt, The Downbeat Seven and Hal & Jean Gilbert.The label was possibly owned by Riley or by Tree Music.

Q- This is now the end of the interview.  Do you have some special announcement to make for our readers, Jayne ?

A- Oh yes.   My good friend Bob the Scared Miner says that the box.net links from his fabulous blog will be available again on the very first day of the nex month. 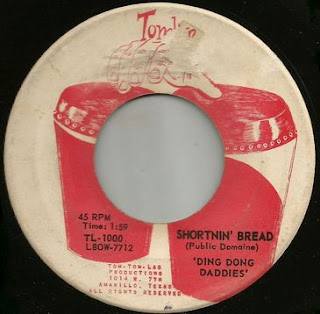 This was recorded in Clovis, New Mexico.  The Ding Dong Daddies were Don Lanier, Gary Swafford and Jon Sisco.

Gary Swafford was next drumming for the Checkmates, a band formed by Ray Ruff.

Guitarist Jon Sisco formed in 1960 The Electras who had a record issued by Jamie Records. Sisco also produced a single for Charlie Phillips on the OAK label.
Don Lanier, musician, songwriter and Nashville A&R man, was born and raised in Texas, one of his earliest music associations was with Jimmy Bowen with whom he started the Rhythm Orchids.

The band was called in to back up new singer Buddy Knox in the studio where he recorded his biggest hit, Party Doll.   While Knox and Bowen wrote the big hit, Lanier contributed to others in Buddy's catalog including I'm Stickin' With You, Hula Love and Rock Your Little Baby to Sleep.

In 1964, Lanier followed Bowen to Los Angeles where he started to do arrangements for his friend, eventually becoming an in-demand studio guitarist and arranger. As a songwriter, his Here We Go Again became a hit for Ray Charles in 1967 and he wrote additional songs for artists such as Dean Martin, the Everly Brothers and Hank Snow. BMI, with which he was affiliated, credits him with 42 recorded compositions.

Twenty years later, Lanier once again followed his friend Bowen as he returned to Nashville. As an A&R man for MCA, Don found major hits for Reba McEntire, George Strait, Loretta Lynn, Patty Loveless and others.
He died in 2014 at the age of 78.

Across The Street From The Chapel 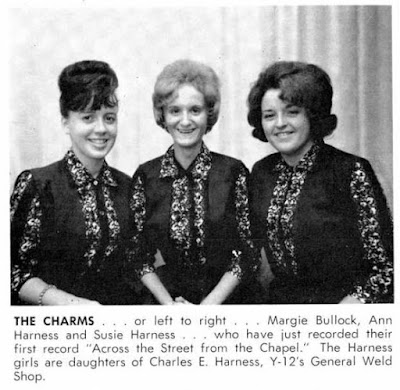 1964
The Charms, three girls from Caryville, Tennessee were graduates of Hacksboro High School.   The Charms have been singing together since they were small children, and have appeared many places over East Tennessee.  In 1963, they won first place at the state-wide Beta Club Convention talent show in Nashville.  They had their own rock' n roll band.   Margie Bullock played the electric guitar, Ann Harness piano and Susie Harness the drums.

Among the members of the band accompanying the Charms on this record were Boots Randolph, Bobby Moore, Pig Robbins and The Jordanaires. 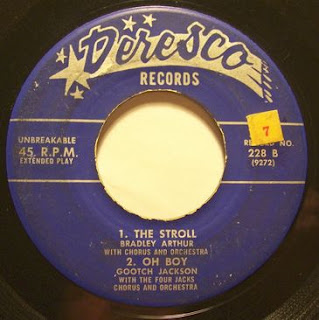 1957
Deresco was a discount label owned by Jalen Amusement Company (14 East 21st Street, Baltimore).   Records on Deresco were masters previously recorded (and issued) by Rite Records of Cincinnati, Ohio
Deresco 228 is a re-issue of the EP Big 4 Hits 228 (same release number used) and of Gateway Top Tune 1236 and 1237 (singles), both labels Rite subsidiaries. 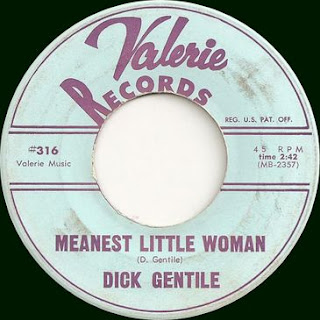 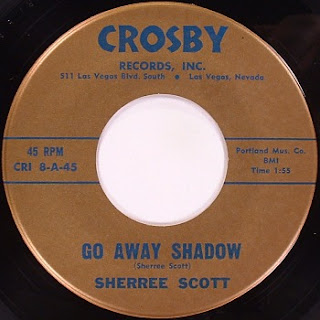 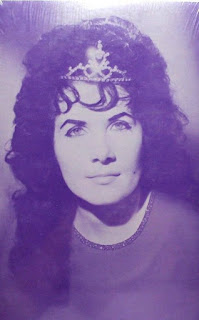 Born Virginia A. Scott in Kentucky, but raised in Florida. Moved to Oregon at the age of 16.
She has toured many sections of the United States, Hawaii and Canada.  In addition to writing all her records, Miss Scott composed several other songs, including "Oregon Is God's Own Country," the Oregon centennial song.   Sherree Scott was managed by Mark Raymer, from Houston (who also managed Link Davis at that time).  Both moved for a  short period to Union Beach, New Jersey in 1960-1961 where Sherree Scott had her own live country music show heard each Sunday at 5:30 p.m. on WFHA-FM  while Mark Raymer was spinning country records at the same radio.

She became an evangelist and recorded a religious LP for Robbins Records with two of her young daughters, Melodee and Shirlee.
In the seventies, she resided in Florida where her Foundation For Christ, Universal Evangelistic Miracle And Music Fellowship, Inc. was based.
She died in 1993, survived by 7 children.


Her discography at RCS 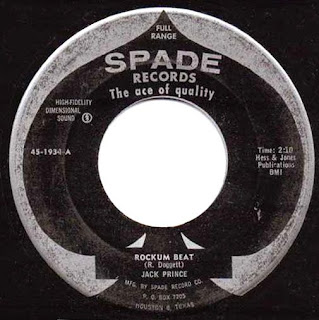 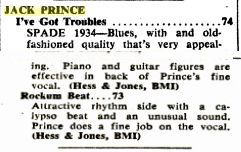 Not Jack Prince, born John Upchurch, of the Andy Griffith Show.  One of the rarest on the label? 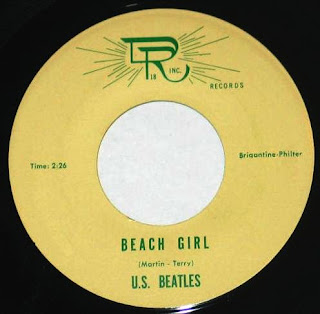 Not sure exactly who owned this label.  Two other records that I know of (The Lifeguards and Cappy Bianco) on the same labels were third issues after being first released on Casa Blanca Records and then on ABC Records.

Martin and Terry, the composers, are Bob Martin and Phil Terry.