Another Cup of Your Sugar 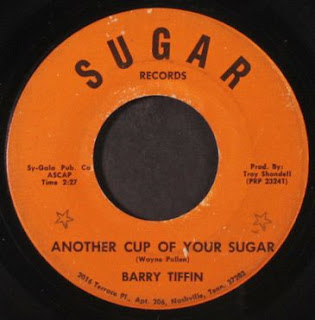 Another Cup of Your Sugar

Barry Tiffin is probably best known for "Candy Bars for Elvis", a recitation number; here he is on hiw own Sugar Records, out of Nashville, produced by Troy Shondell in 1970.

Thanks to Doug Firebaugh, who had an album produced by Barry Tiffin, I can bring to light some details about the man :

The underbelly of Music City harbors countless hustlers and hucksters parlaying real or imagined music industry connections into “services” offered for a price to dreamers with a few bucks to squander. Often a grey area between sincere and scam, Barry Tiffin had just such a racket, but his father’s illness brought him home to Roanoke. A classified ad placed in a 1975 High Point, North Carolina newspaper reveals the angle: “For an appointment and additional information concerning the Professional Music Services of Tiffin Music Enterprises International, of Nashville, Tenn., please contact our office suite at the Ramada Inn in Roanoke, VA.”

Twenty-year-old Doug Firebaugh was referred through a mutual friend to Tiffin, but he entered the arrangement with eyes open. “We had an attorney involved in this,” recalled Firebaugh. Money was paid to have Tiffin to produce an album and contact record labels on the artist’s behalf. Three solid days in Roanoke’s K.A. studio resulted in an unadorned document of Firebaugh’s autodidactic style of songwriting. Firebaugh plays both piano and guitar throughout, with the only addition being an unnamed Nashville pedal steel player who drove six hours for the session before turning around going home. The clip-art cover of the resultant LP positions Tiffin’s Sugar Records imprint far more prominently than the artist’s name.

Also, an article from The Bee from Danville, Virginia (July 3, 1975) related:

Supervisors in Botetourt County may have succeeded in silencing a bigger-than-Woodstock rock concert planned for this historic Western Virginia community in September. the promoter had claimed the Sept. 19-21 weekend concert would draw 800,000 spectators and gross $20 million. Promoter Barry Tiffin said Wednesday he has all but given up on going through with promoting the three-day rock performance which he believes would have outdrawn the now famous Woodstock concert. Tiffin made the statement in the wake of an emergency ordinance quietly adopted by the board of supervisors May 21. He said the ordinance makes Refugees Get Senior the concert an impossibility. Tiffin, who promoted a concert at the Roanoke Civic Center last week, said he worked on plans for the Botetourt County rock festival for 18 months.

But Board Chairman Harold Wilhelm said Tiffin never approached him about the concert, and that he has never seen the promoter. He said the emergency ordinance was not directed at Tiffin's proposed concert; that the supervisors had been working on an ordinance regulatning outdoor musicals for some time


Not surprisingly, Barry Tiffin is one the Candidates For Immortality listed by Irwin Chusid in his book "Songs In The Key Of Z"