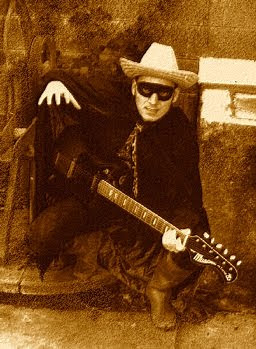 His idols are Hasil Adkins, Jack Starr, and Franzl Lang. But many others inspired him as Jimmie Rogers, Gene Autry, Robert Johnson, Roy Rogers, The Cramps, and Son House. He has a website HERE.

"Atomic Power", written the morning after the bombing of Hiroshima by North Carolina country artist and radio personality Fred Kirby, is without a doubt the most popular of the country Bomb songs... Read more about the song HERE

.
N.B. : Just discovered today thanks to bart * yodel [Yodeling not just for Yodelers].
Posted by Bob at 9:14 PM