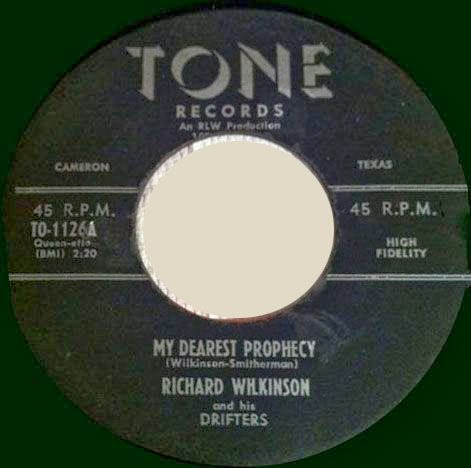 Richard Wilkinson And His Drifters

Probably Richard Wilkinson  b.1935 who died June 1, 2011 in Celina, TX,  He worked as maintenance supervisor for Texas Utilities.  No further info about this local Cameron band.

Song co-writer Smitherman is probably Gene Smitherman, long-time owner and polka DJ for KMIL-AM in Cameron.     Gene had been a co-owner since 1958 and had presided over the popular  Polka Party Time weekdays from 1-2 for many, many years.

This record was likely produced by Wink Lewis.  Wink Lewis got his start in the Texas/Louisiana area and in the mid 50s, moved to West Texas where he teamed up with Hoyle Nix. This year, 1956, Wink Lewis was doing a daily two-hour record show over KMIL, Cameron, Tex.  Like so many back then,  Wink was not only a deejay, but also did some recording. While at Cameron, he and some local musicians formed Tone Records.  One of the records Wink recorded was ‘Zzztt, Zzztt, Zzztt” on Tone.