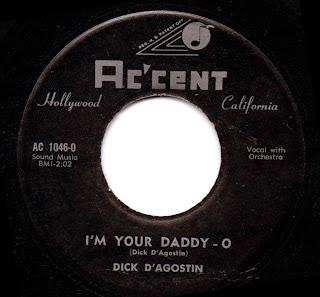 His first, also issued on Moonglow Records (see below).  Not listed in his Rockin' Country Style discography HERE 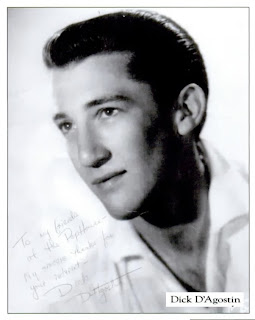 Richard Earl "Dick" D'Agostin, is best known for touring with Eddie Cochran.  Dick was a dance champion and editor of dance columns for two of the first teen magazines, Dig and Modern Teen.  He was with Judi Stein the 1955 winner of Al Jarvis' TV show contest "Make Believe Ballroom" .


The show worked this way: every day 25 teen-age couples from Southern California schools are invited to compete in a jazz dance contest at the American Broadcasting Company's Television Center, Prospect Wk. and Talmadge Ave., Hollywood. Winners selected from each day's competition are invited back to compete for monthly dance championship honors and prizes of television sets, phonographs and radios. All monthly winners return for the annual runoff.

D'Agostin sang and played piano and guitar as the front man for The Swingers, composed of drummer Gene Riggio, saxophonist Paul Kaufman, and D'Agostin's brother Larry D'Agostin on guitar. 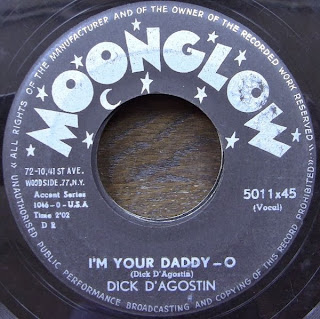 The history of Moonglow Records goes back to the 1950s in Belgium, although most know Moonglow as a 1960s Los Angeles-based label. Albert van Hoogten was owner of Ronnex Records in Belgium, and sent his brother, Rene Jan van Hoogten, to the United States in the mid-1950s to set up a label here. The first version of Moonglow Records was run out of Woodside, New York.
Source : http://www.bsnpubs.com/atlantic/moonglow.html