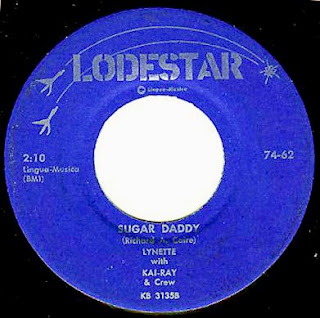 Lynette
with Kai-Ray and Crew

This is the flipside of "Limbo, Limbo" by Kai-Ray and Crew which was a minor hit on KUTT, Fargo, North Dakota and KXLW, St. Louis, Missouri in 1962.

Richard A. Caire, or Kai-Ray or Shane Kai-Ray or Tony Caire came from Wichita, Kansas. He and his band played for some time at the Five Spot bar in Fargo, North Dakota before moving to Minneapolis.  He played lead guitar for several other Minnesota groups, most notably The Bandits and King Krusher & The Turkeynecks.  He was the first in the Twin Cities to have a fuzztone on his guitar (1964). He was also a songwriter, producer and small-time label owner (Kairay label).

A Kai-Ray discography can be found here.  The earliest Kai-Ray known record is on Lodestar in 1961, but I've found a song penned by Richard A. Caire and copyrighted in November 1958, titled "It's Called The Blues".

Lodestar trademark
The label name was taken from the Lockheed Lodestar
twin engine aircraft that was produced in the late 1930s.

Clarence B. Brown had started his first label, Pleasant Peasant (old time "oompah" music), in 1958. He was living in Seattle at the time.  In January 1959 he moved to Minnesota. The center of his activity was New Ulm, Minnesota. with a close connection to Brown's Music Store, owned by an uncle of C.B.Brown.

The Lodestar label was started in as an outlet for pop music, with one brief Country/Western album. Even though address of Pleasant Peasant and Lodestar was listed as Minneapolis, it was actually Bloomington, Mn, a southern suburb of Minneapolis and about a 90 mile drive from New Ulm.

Most of the recordings were performed at Kay Bank Studios in Minneapolis.