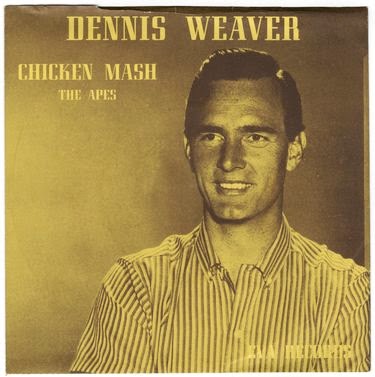 The Chicken Mash / The Apes
Hal Moffett-Bob Summers
Exbrook Music, BMI
Produced by Hal Moffett
Eva 103
1963
Box 2921, Hollywood 28, Calif.
Dennis Weaver, of part-American Indian background, served as a pilot in the U.S. Navy during World War II.  He was a struggling actor in Hollywood in 1955, earning $60 a week delivering flowers when he was offered $300 a week for a role in a new CBS television series, Gunsmoke (1955). After nine years as Chester, who he played with a stiff-legged gait, he was earning $9,000 a week.

Mainly known as actor, Dennis Weaver was also a musician.  In 1958, he formed a singing trio with Milburn Stone and Amanda Blake. In 1960, the trio broke the house record for the Albuquerque Arena during the New Mexico State Fair.   Dennis Weaver recorded three albums of country music in the seventies.