I Don't Care If The Sun Don't Shine 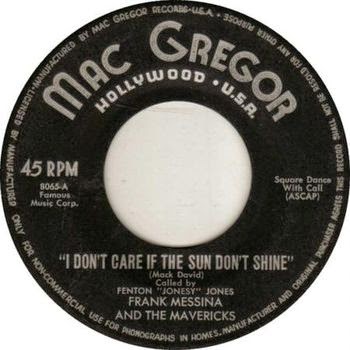 Fenton G. "Jonesy" Jones (1907–2003), born in Los Angeles, was best known as a square dance caller.   His mother, who died when Jones was seven years old, was a pianist and guitarist.  Jones began calling dances in 1940, touring the United States and calling at various square dancing events. He also called dances regularly at his home state of California.
He had previously recorded his calls, first in 1946 on the Black and White then on Imperial, Capitol, MGM and Mastertone labels.[Jones also appeared in many films television series in the 1970s and 1980s, most often uncredited, as a square dance caller

The Mac Gregor label, founded in 1950, was a division of C.P. MacGregor Transcriptions.
C.P. MacGregor. owner of the label, was one of those unseen hands in early radio.  He produced radio programs, recorded musicians, and syndicated everything. He was known as "the DeMille of the discs.".   The first of his companies, MacGregor and Ingram Co. was incorporated about 1929.

MacGregor was a prolific producer and distributor syndicated transcription discs. He did the Shadow, Cecil and Sally Eps, AFRS programs, Al Jolson, Jubilee, Lux Radio theatre, The Hollywood Theatre, Eb and Zeb, and sessions with Leadbelly, Charlie Parker, Stan Kenton... hundreds of others.
Capitol Records, before they had their own studios, recorded in the Mac Gregor Studios in the 1940s.