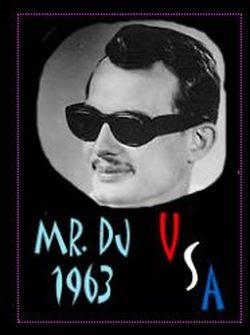 Marly Records
* * *
The very tiny obscure Marly label was from the West Coast. I know only two other releases on the label : Gerry Maplewood (1960) and Rue Barclay.
* * *

Regarding The Panting Panther, the following information is from a PowerPoint document found HERE

o Clair E. Weldon—a.k.a. “Eddie Weldon,” “Mr. D.J. USA,” the “Panting Panther,” and the “Shooting Star of North America”—recorded and broadcasted under his various performance monikers throughout the 1950s and 1960s

o Under the moniker “Panting Panther” on a song titled “Cooler Weather,” Weldon became one of the first popular musicians to cross what then was known as the “color line,” singing with the backing of an African-American blues combo

o Today he continues to work in entertainment, largely under the name “Eddie Weldon”

o A recording firm, having heard nothing of the “Panting Panther” in decades, re-released “Cooler Weather” on an anthology CD with liner notes describing the artists as intellectually inferior “white trash”—and with a somewhat bizarre cover photograph

o Having made no effort to consult Weldon either prior to or after the re-release, they mistakenly assumed the “Panther” to have panted his last