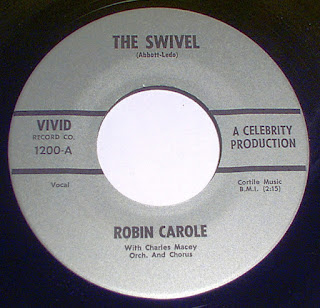 "A Celebrity Production" and "Cortile Music" are both named on his Musicor release and I'm inclined to think that this Vivid release was his own production on a one-off release by the unknown Robin Carole.

Around the same time were two other unrelated Vivid labels : one out of Chicago (Vee-Jay Records subsidiary) and the other founded in 1963 by Bob Crewe in New-York City.

Charles Macey was born in a tenement in Harlem, N.Y.in 1913. His parents had emigrated from Naples, Italy, in the 1890s.  His father was a tailor in the garment district, while his mother stayed home with the family - three girls and two boys.

"I knew I had to get out of Harlem," Macey said.

A ukulele would be his first step toward freedom.  After learning the banjo, Macey would play for tips in speakeasys around New York.  From there, he would go on to play in "taxi dance halls" on (and off) Broadway.   At 17, Macey finally landed a gig on a commercial oceanliner.
From 1947 to 1976 Macey worked as a studio musician in New York where he played almost a dozen instruments. "Remember that song 'The Locomotion? I played three instruments on that record" [Little Eva, Dimension Records].

Macey performed on over 5,000 songs and 2,000 jingles. He recorded with the likes of Louis Armstrong, the Platters, Simon and Garfunkel.  He retired from the recording studios in 1976.
Posted by Bob at 2:40 PM