The Blues Walked In 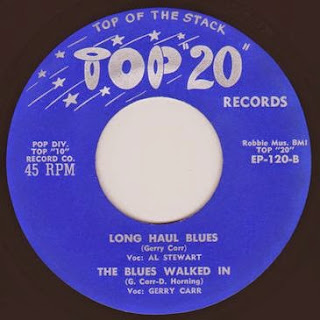 Gerry Carr
The Blues Walked In

Gerry Carr. the Girl of the Golden West, and her husband, Al Stewart, fiddler and vocalist, joined Jerry Behrens, formerly of the Renfro Valley Gang, in 1949.  For five years she was leader of an all-girl band billed as the Wanderers which disbanded in 1956.  She also appeared with the Pee Wee King combo and on various Louisville radio and TV stations.  At one time, she was deejay for WGRC in that city.
She  died  at her home in Louisville in 1959 after a three-month illness.

The Top "20" label was started in Wichita, Kansas by Morton Levand, a veteran in the newspaper business turned songwriter, publisher and record company owner.  He was the son of the publisher of The Wichita Beacon.  Also started at the same time was the Tex label in January of 1955, releasing two singles on Bill Wimberly's Western Swing Band.

Morton Levand left Kansas in 1956 to settle in Phoenix, Arizona to permit his wife to regain her health.  The Tex and Top "20" labels were reactivated early in 1957.  One of the songs he wrote, "Cryin' Thru The Night",  was recorded by Wanda Jackson for Capitol Records.