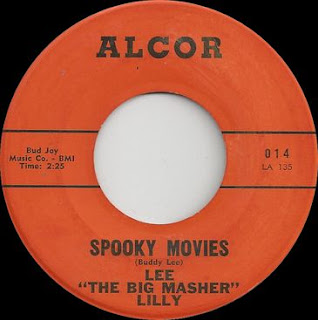 Raised in Arizona and Oregon, Ross Hagen headed to Hollywood in 1962 on a lark after working as a stand-in on Route 66.  A couple of months later he was convinced to record this single which was issued on Alcor Records, a new label just founded by Everest Records.

They said, "Oh man, you should do a record."  So I dit it and I lived off it for about a year.  I don't known if you've ever see what it's like to be a teenage idol for fifteen seconds of fame.  You walk out on this stage and people are screaming.  They screamed like a bunch of vampires.  The hours are horrible.  It wasn't the kind of lifetsyle that I liked.  I like to get up early and listen to the birds.  So I kind of let the music thing drift away.  I wasn't that interested in pursuing a career.

And then of course being from a hillbilly family, the first time they see you on TV, Granny Puss called up and said, "Hon, now that you're a millionaire and a TV star, can you get me some teeth?"  I said, "Granny, I'd love to get you some teeth, but it costs more to join a union than I made on my first job!"

Hagen quickly found work on popular TV westerns like The Virginian and The Wild Wild West, as well as a regular role on Daktari during the 1968-1969 season.  In four decades as an independant actor, director, producer and writer, Hagen has weathered the ups and downs of the film industry during a prolific and diverse career.