Laya Raki, Waxmate Of The Month 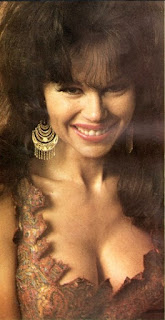 Laya Raki (born Brunhilde Marie Alma Herta Jörns on July 27, 1927) is a former dancer and film actress popular in Germany in the 1950s and early 1960s.  She also became an international star for her roles in English films and TV productions.  She married Australian-born actor Ron Randell in a civil ceremony in London in 1957 until his death in 2005.

Her only commitment to music on wax was in 1962 when Dr. Gilbert Obermair reported "Carina Records signed film sex bomb Laya Raki to an exclusive contract. The gal has already waxed her first record in German and in English."

"Oh, Johnny, hier nicht parken" was recorded during the dancer's stay in Munich in English as well as German.  Considered too pornographic and tasteless the song was banned on German radio.  See Andreas Michalke's blog here for some details.  (All songs can be heard on YT)

IMDb lists some 26 movies and TV series in which she played and danced.  Some videos can be seen at Youtube but, by far her most suggestive dance, in my opinion, was in Beat Girl, a 1960 British film about late-fifties youth-rebellion, later released in the United States under the title Wild for Kicks. See here (the dance start at 6:45) 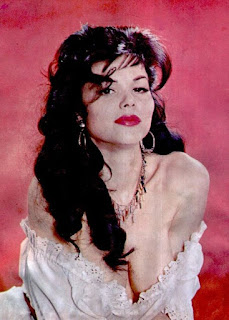 From an article published at the time of the shooting of Crane, a TV series starring Patrick Allen.

"So, OK, I am wearing this blouse for some new shots and I am walking past Patrick Allen, who is playing this great adventurer, Crane. I am walking past and suddenly he say with great shock: 'You cannot possibly wear that blouse! Your bust is showing!' I look at him and I say: "Really? Is perhaps why I am wearing the blouse.' Then he gets angry and he say: 'You are always showing too much the bust. My wife say that she is disgusted.'

"Oh ho, then he can see that I am angry, too, and he start to go back a little. He say: "But this programme, Crane, is not only seen by the adults. I seen by children as well.'

"Well, you know, I look at him then and I say: 'But children are more used to bosoms than anyone else, Patrick. They have grown up with them, you see.'

"Then he is quiet and I wear the blouse and I wear no bra and it all looks very nice, very natural because it is what Halima would wear.