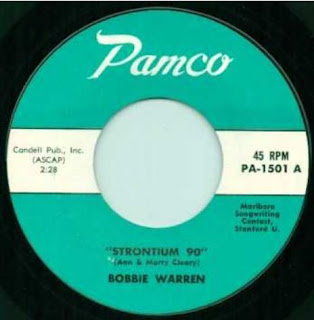 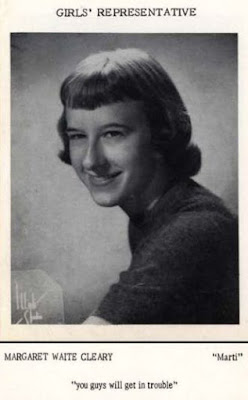 "Strontium 90" was originally written by Ann and Marty Cleary. It expresses concern about the quantity of Strontium 90 , a highly poisonous element , released by exploding atomic bombs. Like the song on the flip, "Strontium 90" was a prize winner at a college contest (Stanford University).

Ann and Marty Cleary were the daughters of Ed Cleary, a law professor in Urbana, Illinois. It is not known if they recorded the song themselves but they performed it at musical reunions in colleges or universities around their hometown in 1960 and 1961. 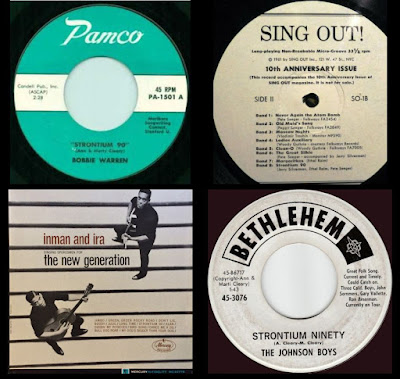 The song was also recorded by Jerry Silverman, Ethel Ralm & Pete Seeger (Sing Out LP), Inman and Ira, Singing Spokesmen from the New Generation (Mercury LP) and The Johnson Boys (Bethlehem Records). These three songs plus the Pamco track can be found in this zipped file.

Last night I went to a party,
Danced so I just about passed out;
But just when the party was gayest
Some crazy guy began to shout:

What will we get from radiation?
No necks, two necks or maybe three;
Each one will have his own mutation;
Nobody else will look like me! (chorus)

So drink to the course of evolution;
The next one may very well be you;
Clouding the air with pollution,
And we'll see you next year at the zoo! (Chorus)