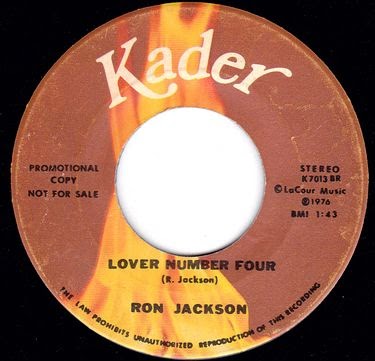 Kader Records was an offshoot of the Enterprise Recording Studios in Maywood, Illinois. The cavernous second-floor studio, built in a 1920s cinder-block bank building, was owned and operated by Bob Kaider and drummer Tom Sparks. (It was renamed Lake Studios in 1980, then shut down at the end of 2001, ending a 31-year run.)

This release by the unknown Ron Jackson was probably produced by Lennie Lacour, a quite prolific songwriter, singer, publisher and label owner - Lucky Four, Magic Touch are the most well known)
According to Kaider : "Lenny walked in one day and talked about how he had been a producer at Mercury and was looking for a place to base his own label.   He had been distributed by Atlantic, and he showed me records to prove it.   We agreed to set up office space where he operated Magic Touch."