By The Time They Get To Phoenix (Part two) 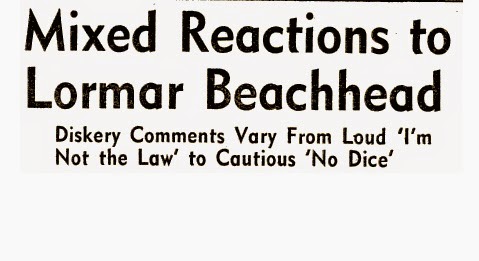 New York — Revelations last week on the activites of the new Phoenix, Ariz., distributor known as Flash Records - an outfit known to have a rich background or hoodlum connections - drew mixed reaction this week from diskers whose labels reportedly were already in the Flash camp or being sought by the firm fo Phoenix distribution.   It was noted last week in an exclusive story from Phoenix that Flash had acquired Roulette, Prestige, Savoy and King, and that overtures were being made to ABC-Paramount and M-G-M.

M-G-M Records prexy Arnold Maxin told The Billboard "They have never even approached us for the line.  Furthermore, in such a case we would always have to consider the great M-G-M name before making any connections which might have even the shadow of a cloud overt them."

Savoy Records prexy Herman Lubinsky said that Flash had approached him for the line. "However," said Lubinsky, "we have made no agreement and there have been no shipments of records made.  As in any case where we are approached on distribution matters, we look thoroly into the parties involved before making our decision."

Syd Nathan, prexy of King Records, reached at his Cincinnati headquarters, admitted that Flash is now representing his line in Phoenix.   "We have done business with the Lormar one-stop in Chicago thru our distributor there and I must say our relationship there has been 100 per cent.  They've always paid their bills on time and they buy only what they need.

"What they do outside of Lormar or Flash is something else again.  I'm not the law, and I'd say if they've done anything wrong, let the law worry about it.  Besides, I say, let he who among us without sin, cast the first stone.  And I don't see anybody throwing any stones."

Sam Clark, prexy of ABC-Paramount, admitted that "they have approached me by mail, phone and personnaly.   However, we're perfectly satisfied with Frontier Distributors in Texas which serves the Phoenix market for us.   We contemplate no change in distributors.  Frankly, I have no idea why Flash should be pushing our "Living Doll" record, but I think I should send them a thank you note for their help."

Bob Weinstock, who heads up Prestige said that "Flash handles our line. They've got shipments of our records now and the only fair way for us to judge them is on the basis of whether they pay their bills and whether they promote the line properly.  I'm not the law and it's not up to me me to try a man.  If they prove a man is guilty of a crime and they send him to jail that's a different thing.  There are plenty of so-called legit people in the distributing business who take on your line, don't pay their bills and disappear.  What about them ?"

One of those queried added that he would take the line away from Flash only if he discovered that they were using the distributorship in Phoenix to get the basic rate and shipping records ino their Lormar
one-stop in Chicago.

Meanwhile, it was learned that tho Joe English is the active manager and operator of Flash, the company, which was founded last August 1, is owned by a Mrs. Margaret Ross of Chicago.