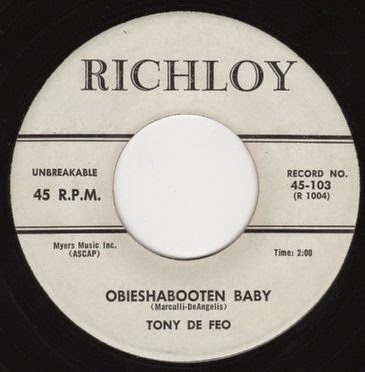 Owner of Myers Music and Richloy Records was James E. Myers.  James Myers started as drummer and performer, leading his own band, Jimmy DeKnight & His Knights of Rhythm.

My father made portable metal bandstands for us, put lights on them, with a drawing of a knight in armor, holding a lance, riding a musical note, and that was our trademark. For a long time we went under that name and performed all over the Delaware Valley. We had a 22 piece orchestra at some locations and if they couldn't afford that, we'd cut down to 15 or whatever they could afford. Sometimes, we'd play clubs with just a trio or a quartet.


In 1946, after four years of combat in the South Pacific, and being away from performing music for so long, Jim Myers didn't feel like going back to playing drums.  He became a music publisher, a record producer and a promoter.  Then he wrote his first big hit :

When I showed it to Bill Haley he flipped over it, but his record company at that particular time, said it would never sell.   He recorded two versions of it, but they never released them.

Then Jack Howard, who had Arcade Records at that time, said he wanted to record it with a group that he had called, Sonny Dae & His Knights.   They were first to release the song and it was a big hit locally.   It sold thousands of records in the Delaware Valley, but Jack didn't know how to promote it nationally.

The major label was Decca and the first song recorded by Bill Haley was "Rock Around The Clock", It's sold over 200 million copies to date, it's been recorded by more than 500 artists in 32 languages,