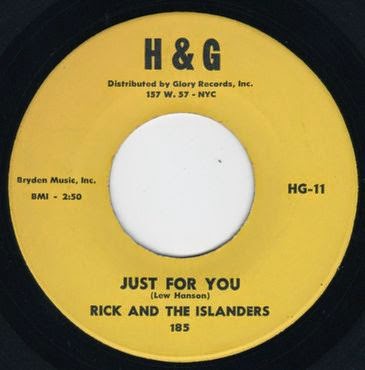 Rick And The Islanders

The Glory label folded in 1959 but Glory Records was still in business in the sixties apparently, distributing records like this one.

Lew Hanson wrote both sides of this release.  Llewellyn (Lew) Hanson, born in 1942, was a Jamaican raised Englishman who wrote Calypso songs in New York.  "He Give Me A True, True Heart" and "Ba-Ra-Ba-Ra-Bi-Ni, The Maroon Love Chant" were among his first songs (copyrighted in 1959).

There was an album titled "Just For You" issued in 1974 by Audio Fidelity Records as by "Lew Hanson and The Islanders".

At some point, he moved to Hartford, Connecticut, working for his own insurance business and, in the same time, producing artists for his Insurance City Records, such as F. Roy Taylor, Rhythm Force, Mary Mundy and Ron Surrey