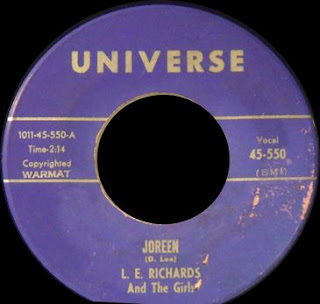 This quite obscure Ohio label, pressed by King Records in 1962, had only two releases, three if we count the second issue of this one which came on a black label.  "Joreen (She's Something Else)" was given a second chance with the release of Universe 501 by Cody Black & The Celestials as the flip of "The Camel Walk"

What the two releases had in common was they were composed and produced by Dicky Lee, a pseudonym for one Warren Hambrick.   I've found several songs penned by Warren Hambrick between 1961 and 1963, but none seems to have been recorded:

1962
Don't Mean Nothin", Ain't No Big Thing; (Don't Mean Nothing),
Everybody Likes To Twist;
Many Regrets;
You're Too Fine;
That Kind Of Blues;
What Did I Do?
Pretty Crazy,