You Make My Heart Sing Ah! 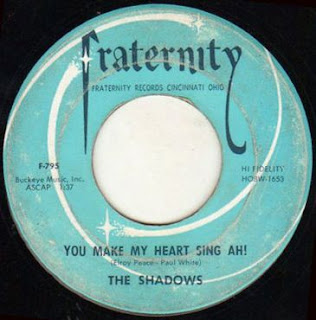 
You Make My Heart Sing Ah!

The Shadows are Elroy Peace and Paul White. One of the most memorable songs of bandleader Ted Lewis  was "Me and My Shadow" with which he frequently closed his act.  Around 1928, he started to use a shadow mimicking his movements during his act.   Several Afro-American played the Shadow.  Elroy Peace and Paul White were two of them in the forties.

Elroy first got steamed up about show business when he was seven years old. He won second prize imitating Cab Calloway on the West Coast and Elroy, under the tutelage of his aunt, Roxy Williams, took the plunge. He won a spot with a Major Bowes' unit and traveled about the country with the Major. He was a pro for real. Elroy was born in Kansas City, Mo., but his big break came when his family moved to Los Angeles.

The late movie actor Ben Carter helped draw Ted Lewis' attention to the artistry of young Elroy and all that can be said is that Elroy has been walking in Lewis' shadow for eleven years.

After this Fraternity single, he was heard on West Coast labels such as Keen, Romeo, or Helga. In the early sixties, during a tour in Australia & New-Zealand, Elroy recorded at least two singles which were issued on local labels.

Elroy Peace was also a songwriter whose songs were recorded among others by Little "Butchie" Saunders And His Buddies (Herald), Gene La Marr And His Blue Flames (Spry) , The Bow Ribbons (his nieces) & Debra Lewis.