My Dog Loves Your Dog 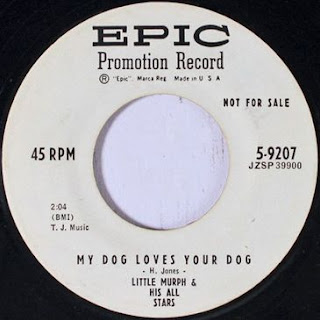 Little Murph & his All Stars

My Dog Loves Your Dog

Cleveland, Ohio recordings first sliced under other banner according to an article published by Billboard ('Bought Masters' Building As Big Factor in Industry, Billboard Jan. 13, 1957 issue) were bought by Epic Records.  Both sides written by Harmon Jones.

"My Dog Likes Your Dog" has been covered by The Cupids (Decca), Homer & Jethro (RCA) and The Diamonds (Mercury).  On each of these covers, the song is as well credited to the mysterious Victor Loyd Bevel and this is his only song appearing in the BMI online database.

Harmon Jones, if he wasn't Little Murph himself, is probably the vocalist on the top side. Harmon, as "Hump" Jones, Harmon "Hump" Jones or Hamp Jones had further releases on Vision and East West. Also, he was the credited vocalist of The Jolly Jax on their Monticello release.