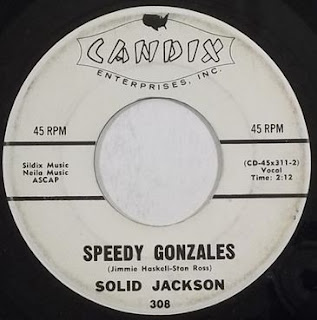 
As "Little Speedy Gonzales" this song has been  performed by The Astronauts in the movie "Wild On The Beach" in 1965.  Film footage of the performance can be seen here

When I posted the flip side "East L.A." here six years ago, I had no idea who was Solid Jackson.  Today, I'm able to disclose the identity of the man behind the "Solid Jackson" pseudonym : this is Stan Ross, Stanley Ralph Ross, prolific writer, producer and actor in film and TV. Ross was first and foremost a writer. He penned more than 250 TV shows, including many episodes of "Batman," "The Monkees," "The Man From U.N.C.L.E.."

Eventually he became an ordained minister who presided over the marriage of Burt Ward ("Robin" on the "Batman" TV series) to his third and present wife.

His real-life nickname, "Ballpoint Baxter," was also the name of a character he played on the "Batman" TV series.

Some interesting bits of bio thanks to the blurb written by Blanche, his mother, found on the back cover of his Del-Fi LP, "My Son The Copy Cat":

My Son Stanley is 27 years old, six foot six, and was born in Coney Island, New York, and you'll like him if you knew him.  He was a very pretty baby but had a lot of allergies.  We still can't figure out why he should be so tall because in my family we're all short. I'm five-five in my stocking feet and the tallest.  His wife, Neila (she should live and be well) is a beautiful girl who feeds my son well enough to make him gain 15 pounds since they god married 5 years ago, although she still has some trouble making blintzes.  Still you can't blame her because with the two children, Andy and Lisa, running around the house chasing the dog, how much time can she put in at the stove?  My friends tell me that the children are good-looking.

Stanley has been making records for a few years under a few different names because he didn't want me to know what he did for a living, so he used to tell me he worked for a advertising agecy.  You perhaps recall "Chaos!" a while ago?  He did it together with Bob Arbogast, a nice Unitarian boy who wrote the songs on this album with Stanley

According to Mark Evanier and I believe what he says :


Stanley was the pushiest writer I ever knew and he was absolutely shameless about promoting himself. There are a lot of people in Hollywood who are like this but Stanley was the Beethoven of harassing people into giving you work. You said "yes" to Stanley because he made it too much work to say "no."