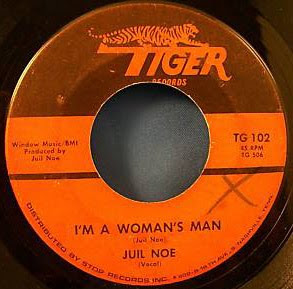 On the same label that brought you Johnny Kay's "Starvation". Distributed by Pete Drake and Tommy Hill's Stop Records of Nashville, Tennessee, this Juil Noel release on the Tiger label can be dated from around 1970.

William Lynwood Montell in his book "Grassroots Music in the Upper Cumberland" has the following information :
" (A) mostly traditional country band originating in Pulaski Country, which played some early rock and roll and country rock, was Juil Noe and the Band of Gold. Juil Noe began his singing career as an indivudal performer doing the early rockabilly style of Elvis Presley, Carl Perkins, and the other rock-and-roll pioneers made famous by Sam Phillips who recorded them at sun Records in Memphis, Tennessee. Band of Gold consisted of Juil Noe, lead singer ; Jim Collins, lead guitar ; Bruce Roberts, drums ; Maxine Mink, backup singer ; and on trumpet and trombone, the Wyrick brothers who were from Garrard County, Kentucky."

"Im A Woman's Man" was also released on the Miracle label - motto : If It's A Hit It's A Miracle - out of Bowling Green, Kentucky in 1968, but with a different flip, backed by the Rockcastle Boys.