Kenny, Frank and Ray : If You Love Me 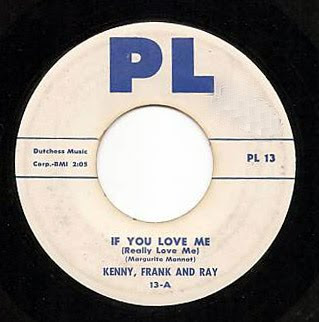 Kenny, Frank and Ray
If You Love Me
Kenny, Frank and Ray were Kenny Chandler, Ralph Stevens (replacing Frankie Cacapardo, departed for the Navy by this time) and Ray Carlisle on PL, a label formed by their manager, Paul Landersman. Was recorded at the Reco-Arts studio and issued in the late 1958. It received only limited regional exposure.

Originally sung in french by Edith Piaf ("Hymne à l'amour"), the song was written by Marguerite Monnot (1903-1961), prolific pianist and songwriter who wrote many songs for Edith Piaf.