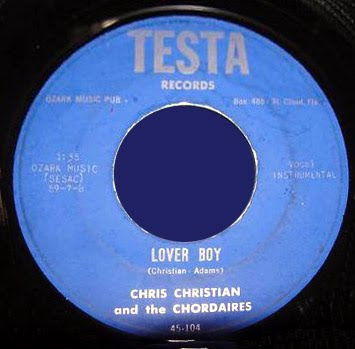 Testa Records, the Missouri diskery, wasn't just Larry Terry and his legendary "Hep Cat" platter. Other -obscure- records were issued between 1957 and 1960, none reaching the sheer splendor of the Missouri Hepcat.

Memory Waltz
Don’t Let Me Be The Last To Know

Gotta Travel On
♦♦ The folk tune, now a hit via the Billy Grammer disking, is handed a listenable country chant by the gal duo. May get some spins in the country marts (Sanga, BMI)

Ozark Moon
♦♦ On this side the gals tackle a ballad to fair results as they sing of their lonely days and nights. (Ozark, SESAC).

Chris Christian and the Chordaires

Lover Boy
No Use Pretending

Deke Dickerson wrote in his Missouri discography published many moons ago in Show Me Blowout #3 : "Anybody know this record? Cashbox reviewed it in 1960 and called it "rockabilly". If anybody knows, swing the info my way.". Even Deke didn't hear this record, is to say how obscure it is! And, yes, it's rockabilly in the Elvis mold, especially on the "No Use Pretending" the ballad side. To best of my knowledge, none of these sides were compiled. Intriguing note : the Ozark Music Pub. address on label is St. Cloud, Florida, which was also the home, around the same time of the Blue Sky label (Rocky 'Hot Rod Baby' Davis)

Testa Records and Ozark Music Publications were owned by Joe Adams. Before establishing his own label in 1957, Joe worked hard to promote a record he wrote and probably also produced. According to a snippet from the Billboard issue dated 5 January 1957 :

Joe Adams, of Ozark Music Publications, Normandy, Mo., typewrites : « Since Sarg Records released No. 141 with my company two numbers, ‘Our Secret Rendezvous’ and ‘Down in Brazos Valley,’ I have personally visited over 100 stations and jocks and mailed out over 250 copies. The jocks are in favor of the ‘Rendezvous’ side. I have about 150 more stations to cover, and if that doesn’t do it, I might as well take a job with some name record company and get paid for my hard labor. My agreement with Sarg was to cover the South. So, if I missed any C&W stations, I’d like to have them drop me a card. The Key Twins are the vocalists on the record. I was somewhat disappointed in the rating I got in The Billboard, and I intend to make your reviewer unhappy when it makes the charts. » 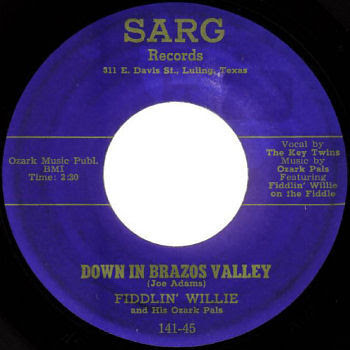 Fiddlin' Willie and his Ozark Pals
Vocal by the Key Twins

Here’s an appealing Western tune with a bright melody. Key Twins handle a lilting vocal with gutty fiddles in backing.

"Down in Brazos Valley" will be heard in the soundtrack of a new documentary film by Damon Cook & Dan Pringle " Sgt. Fitch The legacy of Sarg Records" :

Sgt. Fitch explores the advent and influence of Sarg Records, a small independently owned record label cultivated by WWII hero, Sgt. Charlie Fitch. With his unconventional approach to the recording industry, Fitch redefined Texas music in the 1950s by mixing ethnic styles and different genres to create entirely new ones. Although, Sarg played a significant role in launching some of today's rock 'n roll and country music legends, the label's legacy arguably lies in the overlooked and undervalued treasures from it's relatively unknown artists....