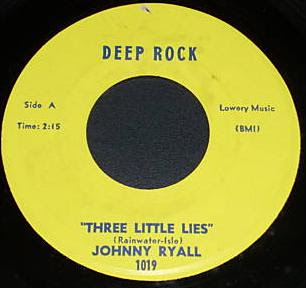 Jay Rainwater, credited as the writer along with Isle (Jimmy? Ronnie?), was Brenda Lee's step-father.

Later that year, the family moved to Augusta, Georgia. Brenda appeared on the Peach Blossom Special on WJAT-TV. It was while appearing on this show that the name "Brenda Lee" was created by the show's producer, Sammy Barton. He felt that Tarpley was to difficult to remember and suggested that she shorten her last name to Lee. Jay Rainwater opened a record store in Augusta and called it the Brenda Lee Record Shop. Station WRDW originated a program in the shop each week and Brenda sang on the show. Disc jockey Charlie Raiford "Peanuts" Faircloth was the announcer. Brenda composed her own theme song.

Was Jay Rainwater continuously hoping for the discovery of another Brenda Lee? Perhaps.