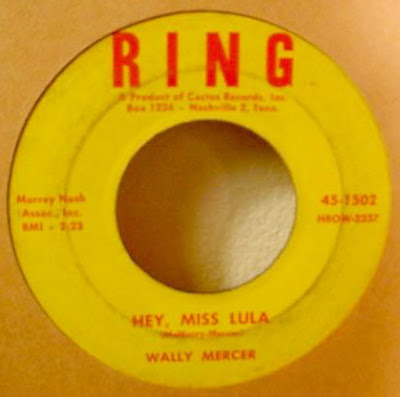 
From the epilogue of "Trumpet Records: Diamonds on Farish Street" a book by Marc Ryan :

For years after the demise of her Trumpet label, Lillian McMurry maintained an active interest in Globe Music, the publishing company where most tunes issued on Trumpet, as well as many others never isued, reposed.

In 1957, she was instrumental in effecting a contract between blues singer Wally Mercer and R. Murray Nash and Associates in Nashville, arranged for several Globe songs originally recorded by Mercer for Trumpet in 1954 to be rerecorded and released on Nash’s Ring label. These included « Hay ! Miss Lula, » which had potential as a rock ‘n’ roll release. Although at least one Mercer was issued on Ring, very few copies seem to have been circulated, and Nash’s venture was soon defunct. Lillian was never offically notified of the release, nor was she compensated for Globe’s songs or for the session fees which she had fronted for the rerecording of « Hey ! Miss Lula » and « Love Me, don’t Put Me Down. »