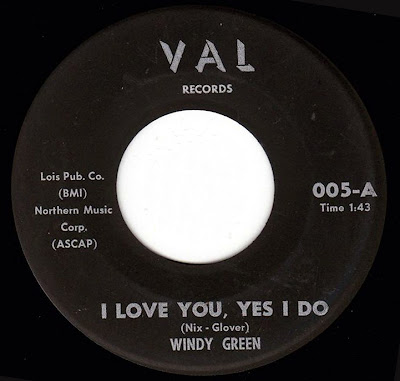 1963
Obscure and unlisted cover of the Henry Glover and Sally Nix song first recorded by Bull Moose Jackson in 1947.

Val Records was started in 1962 by T. Valentine.

From a tribute page for T. Valentine :

Thurmon Valentine was born in West Helena, Arkansas in 1932. Inspired by Sonny Boy Williamson's "King Biscuit Time" show on KKFA, Thurmon moved to Chicago in 1950 to make music and become a performer. From 1957 to 1959 he created and performed a live show called "The Vampire" in clubs with three female co-stars out of his love for "old vampire pictures, Lugosi and all those guys." He met up with Detroit Junior of the Cadillac Baby Show Lounge at 4708 Dearborn Street in Chicago. Detroit Junior had a small record company called Bea & Baby and released T. Valentine's first hot singles around 1960. Soon afterwards T. Valentine started his own label VAL Records in 1962. From there he released his own singles "Do the Do" and "Betty Sue," and both of his versions of "Black Power," as well as recordings from other artists. After divorcing his wife Lucille he decided to get back at her by recording the song "Lucille Are You A Lesbian," inspired by Josie Cotton's "Johnny Are You Queer." Val Records pressed 200 copies. It has become a rare and sought out 45. Most likely Lucille never heard it, but the song has become a cult favorite among lesbians.

Also of interest is the Peter Margasak's article found HERE

And the"official music historians" what they are doing right now? Dump digging around Newark, New Jersey in the search of the old sandwich wrapping on which Elvis is supposed to have written "For He's A Jolly Good Fellow" while in the area for some time in 1964.
This article needs additional citations for verification. Please help improve this article by adding citations to reliable sources. Unsourced material may be challenged and removed.