All Thru The Night 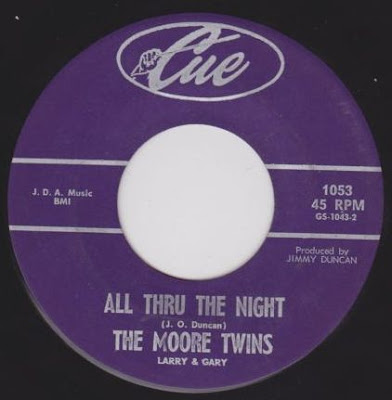 "All Thru The Night"

The flip, "I'm Still Around", has an annoying female backing and can be heard indeed on YouTube, purveyor of great, of not so great and, mostly, of very bad music.

Larry and Gary Moore, twins from Brazosport, played the guitars and sang at various venues, radio and television in and around Freeport, Texas. It seems that they were very popular as some people are still remember them. Sheila Skaggs Hale, anwsering to a Fxxxbxxx inquiry inform us that "Larry Moore is in Hollister MO. I'm sad to report that Gary died many years ago.". Not much to add except that they also had another single, on the Todd label : "It Can Never Be The Same / Rosemary " (1964).

I must say that I've been doing a lot of internet searches and that I'm still confused by several contradictions and little mysteries regarding the biography of Mister Jimmy Duncan. For now, I'd rather not say.

Starting in 1955, just before Christmas, there was Cue #7923/4 by Jimmy Duncan himself (Goodbye To Love / I Asked The Lord). followed thru 1957 by a dozen of singles by the Scholars (member : Kenny Rogers), the Saints and the Sunny Land Trio.

Four singles by The Angel Sisters, Don Angelo and the Saints. These four singles all resulted from some sort of a (rather surprising) deal with famed New-York producer George Goldner.

Dormant between 1959 and 1963, the Cue label was reactivated but had only a handful of singles, the most notable being by bluesman Gatemouth Brown (Summertime / Leftover Blues)

Two singles only (by Louise Hart and another by Chano)