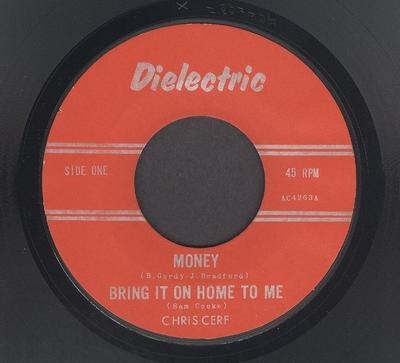 The correct answer is Chris Cerf and I'm rather proud of you, Dead Wax followers, because, as I can see, you do have a rather good musical knowledge. Issued on the undocumented Dielectric label, one side has two Chris Cerf songs. Other side is by different artists. The record was pressed by Shelley Products in Huntington Station, probably in 1963.

Chris Cerf make his recording debut, while still a student at Harvard, and had several songs on the Vanitas LP titled The Harvard Lampoon Tabernacle Choir Sings At Leningrad Stadium recorded in 1961. The successful "The Penguin" was subsequently issued on a single in 1962.

I’ve always been interested in music and when I was a kid, (I’m old enough to have been around when rock and roll was really popular), I especially liked New Orleans style of piano like Fats Domino, and I was taking piano lessons, but not in that. I was much more interested in figuring out how to play doo wop music and blues than in classical.

When I learned how to do that well enough, I tried to write funny rock songs when I was in college. When I was on the Harvard Lampoon we actually made a record of some of them and the reason that’s relevant, I was hired to work on Sesame Street for quite different reasons right after it started but the music director had gone to Harvard with me and remembered I could write rock and roll, so when they need some for Sesame Street, he said, Do you want to try?

Sesame Street songs were really used in Irak by interrogators. The use of music as torture, as weapon or any other purpose other than aural pleasure is a fascinating subject with incredible ramifications.

One of the most interesting internet reading that I've found is the (academic) article by Suzanne G. Cusick published in Revista Transcultural de Música (Transcultural Music Review) : "Music as torture / Music as weapon"