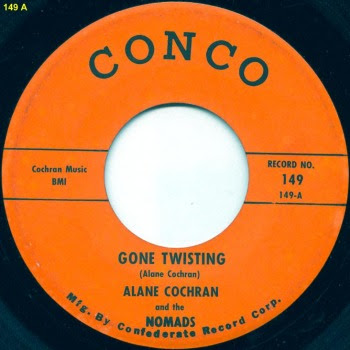 Alane Cochran  And The Nomads

The unknown Alane Cochran is perhaps a relative of Wayne Cochran, a Macon recording artist who may have been owner of the Conco label, or part-owner with Bobby Smith.

I'm aware of only two other records on the same label :

Mr. Smith attended Mabel White Baptist Church and Musella Baptist Church. He was a die-hard University of Georgia fan. A former baseball and basketball coach, he played against the Harlem Globetrotters in an exhibition match in Macon. Mr. Smith founded Confederate Records, Bob-Lo Records, and Macon Recording Studio, the first recording studio in Macon. He worked with many artists, including Otis Redding, James Brown, Wayne Cochran, Bobby Lee, Jerry Lee Lewis and Jimmy Ellis [Orion]. After retiring, his passion was working in his yard. He was predeceased by his daughter, Linda Neal, and brother, Billy Smith.