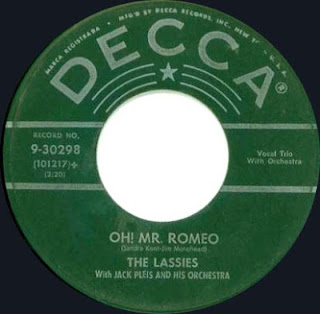 
The Lassies, were formed in Chicago by Joan Goldner.

A Chicago native, Goldner began singing in church at age 7, studied voice with a member of the Chicago Lyric Opera.


“That was back in the era of the girl trios. … Someone in Chicago was looking for a girls trio to manage, and we ended up with a record contract with Decca Records. We cut three records.”

“We were the opening act for Liberace, we won the Arthur Godfrey Talent Contest and we were on the Godfrey Show for a while,” she recalled. “We traveled around the country, sang with bands, did live TV shows ... .”

1956
Decca 29868
The Lassies, vocal with the Ray Charles Singers and Orch. directed by Jack Pleis