Granny in a Mini Skirt 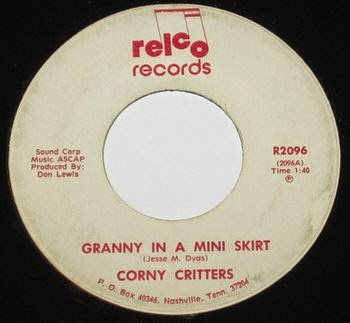 
One of the Caprice Records subsidiaries located at 907 Main Street, Nashville, as were Checkmate and Soundmate.  In a early stage, Caprice Records was closely related to Buzz Cason's Creative Workshop Studios founded in 1970.   Buzz Cason sold his interest in the firm to Charles Pohlman, a Nashville businessman.  Don Lewis presided.

In 1982, Don Lewis was sentenced to six months in prison for wire fraud, and to perform 200 hours of community service in return for his guilty plea of the charge.
The wire fraud stemmed from allegations that Caprice, a custom-contract label, bilked some 450 unknown singers around the country out of approximately $3,000 each in return for record "deals."  Lewis falsely promised in the contracts that the singers would get free auditions, have demos sent to Nashville producers and be provided trips to Nashville for recording (Billboard, 25 September 1982)

Two interesting pages about the song-sharking business, which was I believe quite flourishing in Nashville in the seventies  :