You Caught Me Off Guard 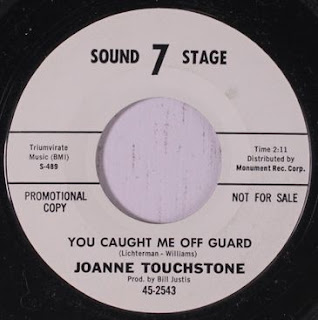 Joanne Touchstone recorded three singles for Sound Stage 7, a Monument Records subsidiary, all produced by Bill Justis in 1964-1965.   As Joanne Spain (her birth name) she recorded disco music for Casino/GRT Records in 1976.   She also wrote "Another Neon Night" that was recorded by Grand Ole Opry star Jean Shepard.

JOANNE SPAIN, 70, of Memphis, Tennessee died on April 6, 2009 at Baptist Memorial Hospital. Surrounded by friends in life and death, she fought a courageous battle with cancer,

Joanne was born on May 8, 1938, in Jackson, Tennessee to Joseph Thomas and Louise Spain. She graduated from Northside High School in Jackson, Tennessee where she starred on the basketball team. She earned her Bachelor's Degree at Lambuth College and her Master's degree from Memphis State University. Joanne's sense of humor was her hallmark. . She was an avid golfer and contributed to the game by serving as president of the Women's Competitions Committee for the Tennessee Golf Association.

She produced many musical productions while a music teacher at Colonial Junior High School that had students expressing their gratitude for those experiences for years after they had graduated. She touched the lives of many students who have become successful adults because of, not only her skills in teaching, but also the lasting connections that she made. As stated in her teacher evaluation, "Love bounced off the walls in her classroom."

Joanne left her teaching career briefly to pursue her dream as a singer/ songwriter. She produced an album with two hit songs, Walk Softly and Elevator. She also wrote the hit song, Another Neon Night that was recorded by Grand Ole Opry star Jean Shepard. A loyal University of Memphis fan, she loved her dogs, golf and the beach.