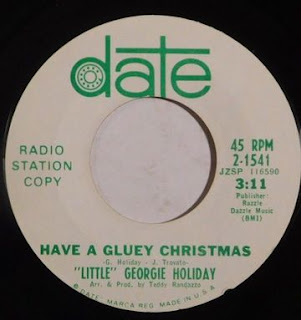 Georgie Holiday (r.n. Joseph Giorgio), a comic entertainer, has performed extensively in and around Boston, Massachusetts from the forties to the eighties.  The first mention of him I've found is from 1947 describing the artist as "the fantastically funny GEORGIE HOLIDAY".  Last mention is from 1980 : Sheraton Regency Resort Hotel: Floor show roster includes.singer Gayle Short, comic Georgie Holiday and Frankie Capri (the Italian Sammy Davis Jr ) plus the Jane Leonard Quartet for dancing.

The Date single, first issued for Christmas 1966, was re-issued the following year and reviewed by Cash Box :

Have A Gluey Christmas (3:11) [Razzle Dazzle, BMI-Holiday, Trovato]
Weird sense of humor on the part of a “child” sets up a funny side that
stands a chance of copping novelty honors for this year’s Christmas
sales. High-voiced lead, soft choral backdrop and a quaint ork sound make
for a wild bit of change-of-pace spinning. Flip: “Clarence the Cross-Eyed
Bear” (2:10) [Same credits.]

The Date label, a subsidiary of Columbia Records, promoted independently produced recordings as opposed to Columbia's in-house productions. This Date single was one of the earliest Eastern Productions, a firm formed in 1966  by singer & songwriter Teddy Randazzo.

NEW YORK — Eastern Productions,
an independent record production firm,
has been formed bv Teddy Randazzo.
The company will headquarter at
1631 Broadway (PL 7-7630). The
new enterprise will focus on and in-
corporate elements of Eastern music
in its disk productions.

Artists signed by Eastern to date
include Jeff Monn & the Third Bardo
and John Power & the Facts of Life.
A disk by the former group is due
for release shortly. Randazzo is ne-
gotiating pacts with several labels.
Producers for Eastern, in addition to
Randazzo, are Victoria Pike and Rusty
Evans.