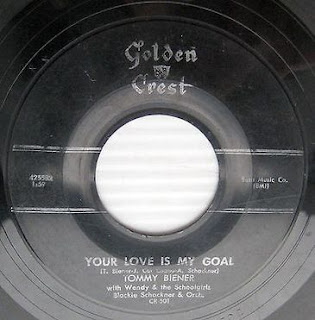 
Tommy Biener
With Wendy & The Schoolgirls
Blackie Schackner and Orchestra

TOMMY BIENER Golden Crest 501 TOP 40 (Michele, ASCAP) An effective novelty-blues with clever lyrics about a guy's personal fem hit parade. Swingin' backing by a fem group gives the disk a provocative sound. It rates whirls. Flip, "My Love Is Your Goal," is a medium-beater (Beta, BMI). 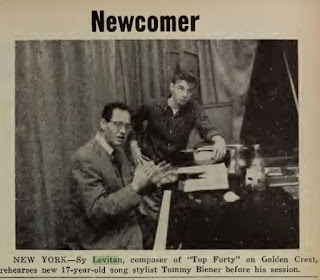 Born John Thomas Biener in New York (in 1937 or 1938).  John Byner's stand-up comedy career began in New York's Greenwich Village where he worked for a year for Max Gordon at Gordon's jazz club "Village Vanguard". He then went on to open for some of the finest jazz greats of his time and steadily became a favorite New York nightclub fixture. As he rose to the top of his game, he opened or headlined prominent niteries throughout the country included headlining stints at Basin Street East, Copa Cabana, Latin Quarter, The Rainbow Room and at such showrooms as Harrah's, The Sahara, The Sands, Caesar's Palace, The Tropicana and Las Vegas Hilton.

In the 1960's anyone want to get national exposure wanted to be on Ed Sullivan. For John Byner his big break came in 1964 when he was a feature act on the show. The highlight of his act was when he did an impression of Mr. Sullivan introducing Elvis Presley and then did a song as Elvis.