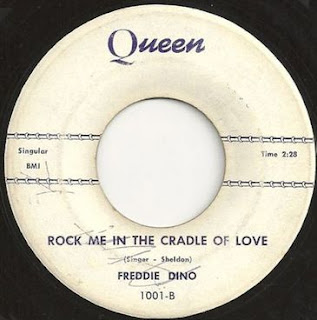 One-off label out of Philadelphia.  Penned by Artie Singer and Jon Sheldon (actually a  pseudonym for Kal Mann), the song was also recorded by Dee Dee Sharp for Cameo Records in 1963  with lyrics credited to Kal Mann and music to Dave Appell, © Kalmann Music, Inc.; 22 July 1963

I assume that this version came just before the one on Cameo.  Similar lines in the label design are found on Philadelphia labels released in 1962/1963 (Lash Records and Taba Records for instance).

I've found only one mention on record of a Freddie Dino who composed in 1965 one side of a Dino & His Fabulous Jerrels single on a Rochester, New York label named "Star Artists" (later, Capitol Star Artist)