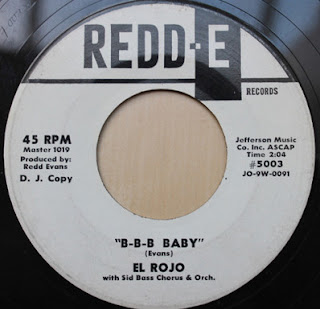 El Rojo, whose real name and/or biography is unknown to me, is described in the Billboard magazine dated 8 Oct. 1958 as the Edmundo Ros of Bermuda.  A second single on Redd-E 5006 featured "Play Ball You All"  a rock vocal runthrough on a baseball theme, co-authored some years back by New York Yankees' annoncer, Mel Allen.


Redd Evans opened his own label in New York, Redd-E Records,in February 1954.
Redd Evans (1912-72) composer, author, publisher, musician, singer and record executive, was most famous as a lyricist, whose hits included “Rosie the Riveter,” “There! I’ve Said It Again.” “Let Me Off Uptown,” “No Moon at All,” “Don’t Go to Strangers,” “American Beauty Rose,” “The Frim Fram Sauce,” and “If Love Is Good to Me.”  He was also a singer and he may have been a better-than-competent ocarina player, at one time a member of the Horace Heidt dance orchestra.

The most popular number of his was "Rosie the Riveter," co-written with John Jacob Loeb.  "Rosie" captured the nation's imagination; and during the war pictorial versions of her at work, notably one by Norman Rockwell, graced bulletin boards and magazines throughout the nation.  The song was usually played so that between the words "Rosie" and riveter", there was a pause during which a rapid drum roll approimated an air hammer flattening a rivet.

Jazz singer Anita O'Day, at the age of fifteen, met Redd Evans. She credited him later with introducing her to the existence of riffs, which she defined as a "repeated musical phrase.". 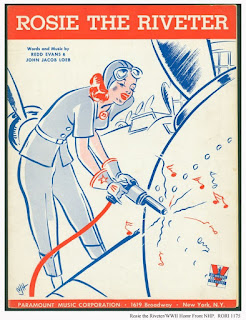