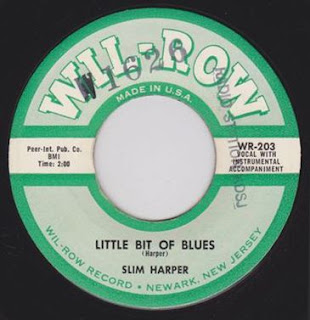 Slim Harper
Wil-Row WR-203/WR-204
1957
Newark, New Jersey
Slim Harper and his brother Rocky as kids back in Virginia used to listen to the Blue Sky Boys and The Bailes Brothers on the radio out of WBT in Charlotte, N.C.,

“Every day at noon they’d come on and we’d listen to ’em. That’s what got us started really,” Rocky Harper recalled. “We started playing trying to imitate those guys. I played the mandolin and Slim played the guitar.”

In 1952, Slim Harper, formerly with WXGI, Richmond, Va., joined WLVA, Lynchburg, Va.,  replacing Curley Garner,.  In 1957 he was running the “Midnight Jamboree” over WVNJ-Newark,  In 1958, the Slim Harper Show featuring Billy Sage and the Virginia Playboys had been booked by Smokey Warren to hold forth indefinitely each Friday and Sturday night at the Scandia Club on Route 28, Garwood, New Jersey.

Slim moved to Fort Huachuca, Arizona in the sixties where he recorded for the Goldrose label 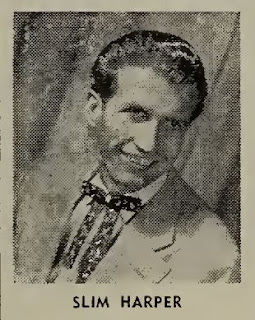