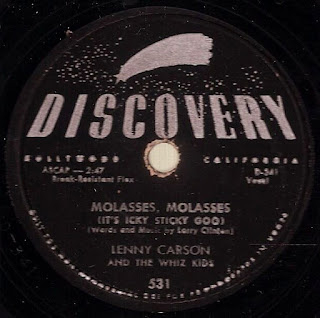 You have certainly heard of The Great Molasses Flood that occured in January 1919 in Boston after a storage tank collapsed, sending more than two million gallons (eight million litres) of molasses flowing through the city’s North End. The deluge caused extensive damage and killed 21 people.

31 years later, the lesser known Second Molasses Flood flooded the airwaves and the record shops in the year 1950. The culprit was Larry Clinton who wrote words and music to "Molasses, Molasses (It's Icky Sticky Goo)" which was first released by Lenny Carson and the Whiz Kids on the Savoy subsidiary Discovery. Soon, the song made a loud splash in the disk business and a dozen artists recorded the song, among them Teresa Brewer, Ella Fitzgerald and Spike Jones.

The sonic deluge caused extensive damage to the most fragile ears but, fortunately, killed nobody. 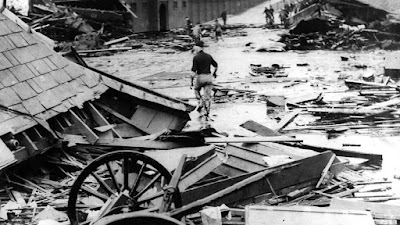 Go, Get The Goo HERE

Unfortunately Kenny Rogers (Coral), Judy Valentine (with Tommy Tucker orch., MGM) and The Galli Sisters (National) are still missing and have not yet been found.