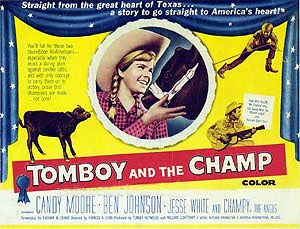 Movie picture "Tomboy and the Champ" sort of soap opera/country musical directed by Francis D. Lyon was premiered in Texas on 1 April 1961, exactly 50 years ago.

Candy wants to be an animal husband.
Family gives her Champy, a prize steer.
Champy gets lost.
Candy gets polio.
Champy is found.
Candy gets well.
Champy loses big contest, gets bought by beef company.
Candy goes into a coma.
Champy is rescued.
Candy recovers. 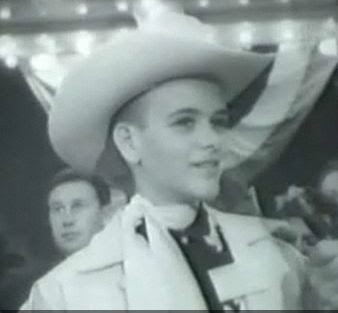 Jerry Naill
Of greater interest is the single by young Jerry Naill which was specially released at that occasion, pairing "Barbecue Rock" and "Love Valley". Jerry Naill played his own part in the movie, as well as Rex Allen and Casey Tibbs. I assume that Jerry Naill, despite his young age, was already a seasoned performer and that he sings the song in the movie? No further info found, I'm sorry to say.

"Barbecue Rock" , involving two great american traditions: barbecue and rock and roll, was penned by the owner of the legendary Hitt Records, Elsie WILKS. Label out of Baytown, Texas.

Anyway, I have only the first 45 seconds of the song . That's enough for regretting not to have the full song,