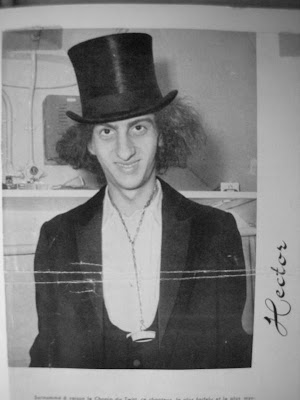 One of the songs scheduled for the session was a cover in french of the Eddie Cochran hit "Something Else" retitled "Elle est Terrible" and translated by André Malraux :

But Hector, an admirer of Screamin' Jay Hawkins and of Screamin' Lord Sutch, choose instead to sing in english, putting himself toward the apostate Cajuns.

As finely observed by John Broven in his book "South To Louisiana - The Music of the Cajun Bayous'" :

Although most swamp poppers clearly are proud of their heritage, some musical purists argue otherwise : advocating a twisted form of cultural elitism, this small, ill-defined, but well-entrenched faction regards swamp pop artists as apostates – Cajuns and black Creoles who turned their backs on their heritage in exchange for a greater chance at national fame and commercial success – and so deny swamp pop music and artists the benefit of the preservation and promotional efforts afforded to the traditional Cajun and black Creole music.

Apostate without national fame, without commercial success, Hector was however the following year in France. Billed "Le Chopin du Twist", he was the winner of the Grand Prix de l'O.R.T.F. -Office de Radio et de Télévision Française- in Paris. Nothing much happened.

In 1965, Hector was contacted by the french S.D.E.C.E. (Service d'Espionnage et de Contre-Espionnage) for a secret mission in Israël. He worked in Jaffa, at the Maxim Bar, probably for a very short time, as his contract was abruptly terminated. The reasons are detailed in the following document, that I got myself in some ways : 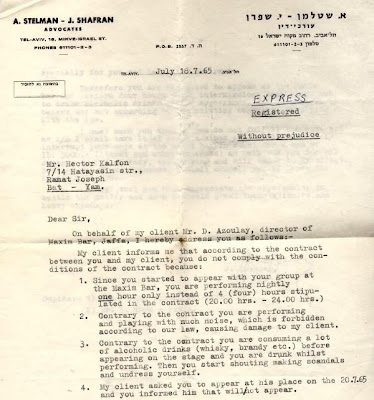 
.
Very obscure record. Not even mentioned in the OUDISPO (Ouvroir de Discographie Potentielle) discography
Posted by Bob at 9:10 AM